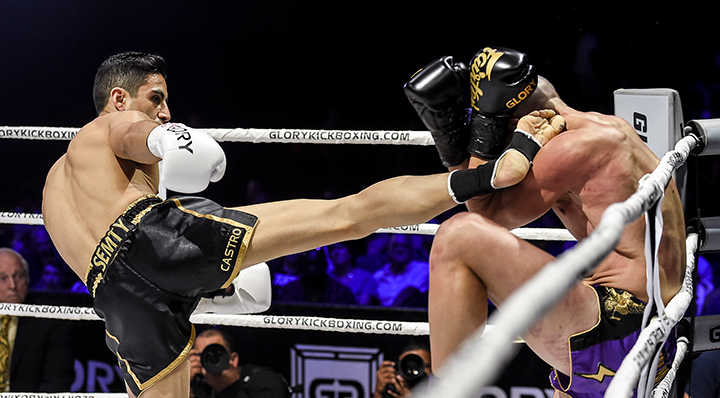 Greskiewicz fired low kicks, but was instantly countered by body kicks from Vidales. Greskiewicz showcased his veteran prowess, checking the low kicks of Vidales and keeping range with a front kick.

Vidales rushed forward despite Greskiewicz’s efforts, landing a flying knee along the ropes. A heavy right hand to the solar plexus sent Greskiewicz crashing to the canvas.

He survived the count, but Vidales smelled blood and unleashed a flurry along the ropes. The onslaught produced a second count from the referee, but Greskiewicz ultimately made it out of the round.

Vidales came out aggressively in round two. He looked for another flying knee, but Greskiewicz was able to block it. Greskiewicz kicked the body which allowed Vidales to catch the kick and counter with a right straight.

He backed Greskiewicz into the corner and flurried with punches. A clean right hand from Vidales sent Greskiewicz to the mat for a third time in the waning seconds of the round. Greskiewicz recovered again, sending the fight to the third round.

The combinations of Vidales continued in the final stanza. He finished each with a kick, nearly chopping down Greskiewicz with a head kick. Another big body shot from Vidales produced an obvious wince from Greskiewicz, but he stayed on his feet.

Vidales backed him into the corner and unleashed a series of knees that put Greskiewicz down for a fourth and finally time, earning him his 12th career knockout.

“I really appreciate that the crowd loves how I fight,” said Vidales. “I knew he was going to be tough because he has a lot of experience. I want to keep climbing the ranks and working hard.”

Baltic viewers will be able to watch all GLORY events