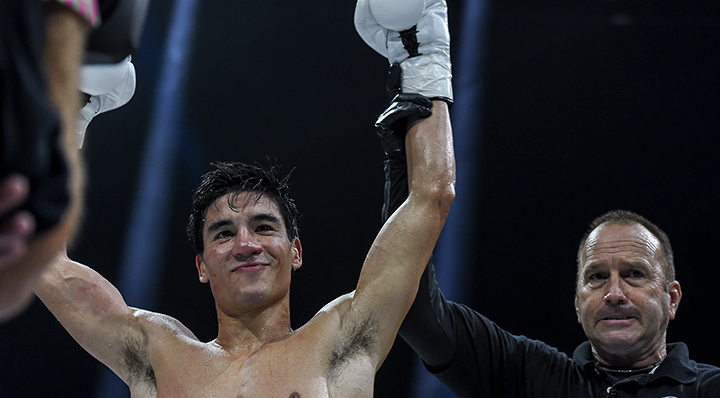 Nelson raced to close the distance against the former title challenger. Jauncey caught the less experienced fighter with a left hook.

Nelson’s awkward style did not faze Jauncey, who used a high guard to avoid absorbing a damage. A high kick from from the Canadian rattled Nelson for a moment, but the Denver-based fighter stayed upright. Nelson remained the aggressor, but Jauncey landed the cleaner shots, closing the round with a knee strike.

The low kicks of Jauncey found a home early in the second stanza. Nelson dropped his hands from a low kick and Jauncey connected with a knee flush to his jaw. Nelson crashed to the mat and the referee counted while he recovered.

Nelson managed to recover and Jauncey fired off a flying knee as soon as the fight continued. Jauncey opened up with his punches, trading wildly with Nelson. A spinning back kick from Jauncey found the body of Nelson, but he did not go down. The round concluded with Nelson backing Jauncey against the ropes with punches.

Jauncey went for a right head kick at the start of round three. Nelson walked through and marched down his experienced foe. The face of Nelson wore plenty of damage. A right hand from Nelson found the chin of Jauncey as he came forward.

The pair traded in the pocket against the ropes and Nelson landed an uppercut through the guard of Jauncey. Another head kick attempt from Jauncey was countered with a knee to the ribs from the South African.

A right hand from Nelson landed, followed by another spinning back kick from Jauncey. Nelson finished the round with a left hand, leaving the outcome in the hands of the judges.

All three judges at ringside scored the fight in favor of Jauncey.

“I knew he was going to be a tough fight. He’s got a hard head,” said the victorious Jauncey, who later requested a title shot.