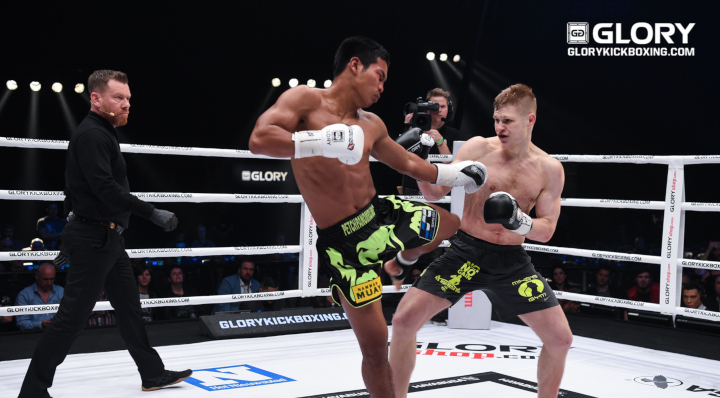 GLORY is bringing a stacked card to Houston, Texas on Friday, February 1.
The organization’s first event of 2019 plays host to a number of key bouts which are going to have immediate implications for their respective weight classes.
The Headline bout is a Featherweight title fight between defending champion Petchpanomrung Kiatmookao (161-36-2, 27 KO’s) and former champion Serhii Adamchuk (38-9, 14 KO’s).
It will be the first time Muay Thai master Petchpanomrung is defending the title, having taken it from the previously-dominant champion Robin van Roosmalen at GLORY 59 last year.
With a five-fight win streak behind him, Petchpanomrung is at the peak of his powers right now. Despite being just 22 years old he is massively experienced - like most Thai fighters, he began training in near infancy and turned professional before his teenage years.
Adamchuk rides a three-fight win streak into the fight and is 4-1 since GLORY 39, where he lost a split-decision to Petchpanomrung in the final of a four-man tournament.
That first fight was extremely close; Adamchuk represents a very tough test for a first title defense, but Petchpanomrung’s level has surged since that first meeting, so Adamchuk will also need some new tricks.
In the co-Headline spot, two of the USA’s best prospects are facing off in a fight which will see the winner take the mantle of America’s top Welterweight contender.
Omari Boyd (13-1, 1 KO) has five wins from five GLORY appearances while ‘Trouble’ Troy Jones (8-1, 7 KO’s) has gone 2-0 in his two outings to date. His head kick stoppage of Casey Greene at GLORY 58 in September was picked up by ESPN Sportscenter.
In the middle of the Main Card is former Middleweight champion Jason Wilnis (30-9-1, 8 KO’s). Having faced and beaten some of the best in the world, both before and after his title reign, he’s traveling to Houston to face the city’s own Jacob Rodriguez (2-2).
Rodriguez has a fraction of Wilnis’ experience but is looking for a fast track up the Middleweight ladder. Houston pride dictated that when Wilnis was announced as coming to town, Rodriguez felt compelled to defend home soil. It’s as big a challenge as can be found in the sport, but that’s what Rodriguez is about.
Another of the Main Card’s Featherweight bouts sees Florida’s Asa Ten Pow (8-1, 5 KO’s) — who has been nominated for GLORY Newcomer of the Year 2018 - bring a 3-0 GLORY record to face Minnesota’s Nate Richardson (12-4, 6 KO’s), who is 2-2 in the organization.
Opening the Main Card is GLORY veteran Richard Abraham (13-7, 4 KO’s), who will be making the walk to the GLORY ring for an 11th time. He’s facing Charles Rodriguez (9-0, 4 KO’s), who brings a 3-0 GLORY record and a perfect professional record to the Welterweight contest.
GLORY 63 HOUSTON takes place Friday, February 1 at the Arena Theatre in Houston, Texas. Tickets are available here