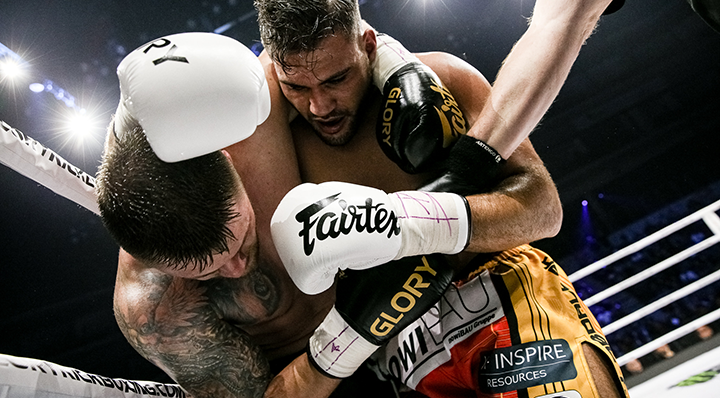 The co-main event of the GLORY 69 Main Card pitted German Heavyweights Michael Smolik (32-0, 23 KO’s) and Mohamed Abdallah (18-4, 6 KO’s) against one another in a grudge match.

Smolik went for a flying knee at the opening bell. Abdallah used a high guard to block the strike and he quickly closed the distance. After every break, Abdallah rushed into the clinch. The referee warned the fighters for holding less than a minute into the fight.

Abdallah continued to plow ahead and force Smolik to clinch. The sluggish action was criticized by the German crowd. Smolik scored with a knee to the body just before the round’s conclusion.

Abdallah barreled forward to start the second round. Smolik tried to circle away and land a hook. The referee warned Abdallah for pushing. Smolik fired a spinning back kick, but was quickly held by Abdallah.

Smolik’s mouthpiece fell out and the referee again paused the action to warn the fighters for action. Abdallah landed a few short shots from the clinch. Abdallah was again warned for holding and the crowd let him have it.

Smolik landed a knee to the body of Abdallah. The fight finished in the clinch along the ropes The judges scored the fight in favor of Smolik, who remained undefeated.

“It was a hard fight because he didn’t fight me, he hugged me,” said Smolik. “But respect to my opponent. The war is over for me, Mo Abdallah. I give you my hand.”