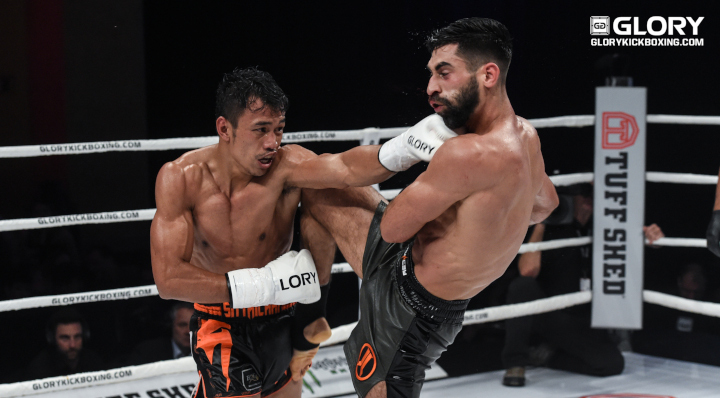 In the GLORY 61 main event, the promotion’s dominant Lightweight champion Sitthichai Sitsongpeenong (122-30-5, 32 KO’s) put his belt on the line for the sixth time against a familiar foe in the shape of Canada's Josh Jauncey (29-9, 15 KO’s).

The pair met three years ago at GLORY 22, with Thailand’s Sitthichai winning by decision. Since then, Sitthichai has been nearly unstoppable. Jauncey recently scored wins over Stoyan Koprivienski and Christian Baya to earn his crack at gold.

Kicks came early and often from the Lightweights. Jauncey fired low kicks with his right leg, attacking the lead leg of the southpaw champion. Sitthichai ripped his patented left kick to the midsection of the Canadian.

Sitthichai scored with a slick boxing combination, forcing Jauncey to reset. The champion got Jauncey on his back foot and quickly scored with a jab-straight combo and finished with a knee. Jauncey looked for a head kick late in the frame, but it was blocked by the Thai fighter.

Jauncey was aggressive to open round two, but it left him open to counters. Sitthichai snapped the head of Jauncey like a Pez dispenser with an uppercut. He then followed with a left body kick and a straight left hand.

Blood started to pour from Jauncey’s nose from the champion’s attack. A knee from Sitthichai connected with Jauncey’s right arm and causing him to lose balance and fall to the mat, prompting a count from the referee.

Jauncey argued that the strike it hit his arm, but it was in vain and ruled a knockdown. The remainder of the round saw Sitthichai utilize his boxing as he kept Jauncey guessing with his punches.

The third round started with some controversy, as the champion’s corner lost his mouthpiece. The referee yelled angrily as nearly 30 seconds elapsed before Sitthichai was prepared to fight.

When the action continued, the challenger returned to throwing kicks. Jauncey’s low kicks were his most effective technique but they were frequently countered by punches from Sitthichai.

Sitthichai scored with a big knee to the body and followed it with a flying knee attempt in the corner. Jauncey remained active, scoring with punches of his own, even wobbling the champion for a moment. The pair exchanged heavy body blows as the round expired.

It was the champion who came out with a purpose in the fourth stanza. He used his left kick to set up his hands and another heavy knee to the body.

Sitthichai backed Jauncey into the corner and delivered another uppercut. Jauncey was able to maintain his output, but he was always a split second behind the champion. Sitthichai finished the round strong with his boxing.

Jauncey switched to southpaw early in fight’s final frame. It was short lived, however. He returned to orthodox and landed a solid right hand. Sitthichai responded with a left kick.

Jauncey again looked for low kicks, but was greeted with a knee to the body. Jauncey fired a head kick, but the champion was able to circle out of range.

An axe kick attempt from Jauncey was followed by a ‘Rolling Thunder’ rolling kick. Sitthichai answered the flashy techniques with a jumping roundhouse attempt of his own as time wound down.

The judges’ decision ended up being a formality as Sitthichai successfully retained his title for a sixth straight time. The lopsided decision did not reflect the hard-fought nature of the five-round battle. Following the fight, Sitthichai paid respect to his challenger.

“I came out well and strong. Jauncey got better and came to fight,” said the victorious champion of his performance. “[In the future] I want to get harder punches and not just rely on my left kick.”