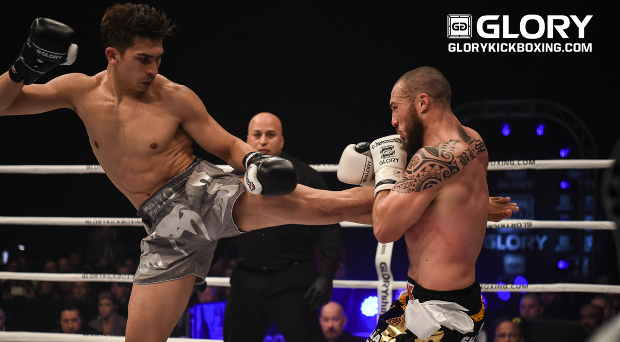 Richard 'Maximus' Abraham was 4-0 in GLORY going into this fight with the debuting Antoine Pinto. Occupying the co-main event slot and with more than 500 fans having bought tickets via him personally, Illinois-resident Abraham was a hometown hero on the verge of placing himself into title contention.

Pinto is a French national but has been raised in Thailand since his early years. He had his first Muay Thai fight at the age of 11 and has had more than a hundred bouts under those rules before crossing over into kickboxing to join GLORY.

He was heavily booed by the crowd when he entered the arena but he lapped it up. Pinto is very comfortable playing the bad guy, which is fortunate, because by the end of the fight the crowd would dislike him even more.

Shorter and stockier, Abraham needed to close the distance with Pinto and let his hands go. But making that happen against the tricky French Welterweight was to prove a difficult task. Abraham had a successful first round but over the course of that three minutes he was able to get Abraham's measure.

Over the following two rounds Pinto, an extremely good kicker, was able to continually pick Abraham off as he tried to bridge the gap. When Abraham did force his way through the kick shield, Pinto would tie him up in a clinch, land a knee and then wait for the referee to separate them and reset the fight at distance.

Pinto's body kick is an effective weapon both defensively and on the attack. Abraham's torso was wearing numerous red welts by the midpoint of the second round. His clean striking opportunities were extremely limited, most of his output landing on Pinto's guard or being spoiled by a counterstrike or clinch.

Over the course of the fight Pinto hardly used his hands, which is very unusual to see in the GLORY ring. His technical kicking and use of distance kept him out of trouble while at the same time racking up points. Frustration set in for Abraham and his large crowd of supporters grew quieter as the minutes ticked away. It became obvious that he was not going to find a way to break through and land the shots he needed to land.

A key point came late in the third round. Pinto was moving backwards towards the ropes as Abraham advanced. He threw a left kick to the body, stepped back and prepared to throw another. As Pinto lifted his leg, Abraham used that as his cue to leap in with an overhand right. The shot connected and Pinto went over to the canvas, but the referee ruled that it was a slip and not a knockdown. Abraham protested but the referee insisted that Pinto had been knocked over only because he was coming up on one leg as Abraham threw.

Was it the right call? The two fighters take opposite views. Pinto says it was a mere balance issue and points out that he was not rocked by the blow, which he claims landed on the shoulder rather than his head. Abraham says that the blow connected with the head and that under the rules, it constitutes a damaging strike which made the opponent go down and thus should be ruled a knockdown.

If the crowd was no friend of Pinto's when he entered, it positively hated him by the end - when the judges returned a split-decision victory in his favor, he mounted one corner post, faced towards the crowd and made a throat-slitting gesture. A natural showman, Pinto fully embraced the villain's role and looked like he enjoyed every minute of it.

Abraham now suffers his first loss in the organization and takes a step back in his quest towards a title shot, while Pinto has announced himself as an interesting new presence in the division and looks set to cause more problems for his future opponents.