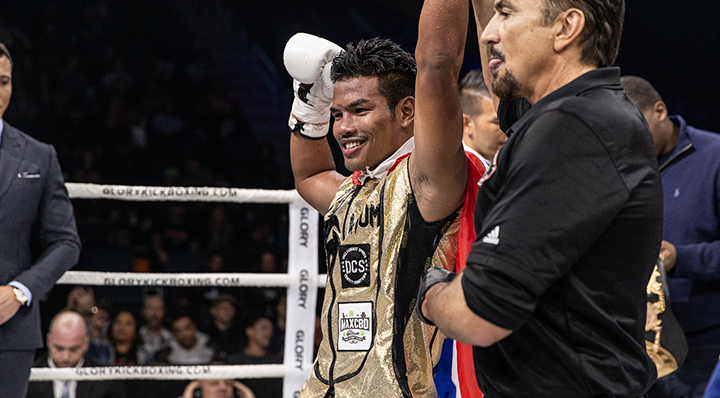 Accustomed as he is to stoppage wins and emphatic decision victories, the Thai champion tonight found himself retaining his title by way of majority draw, the result of a point deduction in the final round.

Opposite him was former interim Featherweight champion Kevin VanNostrand, who had stepped up to take this title shot just over two weeks out when originally scheduled challenger Aleksei Ulianov was forced to withdraw from the bout.

Petchpanomrung (163-36-3, 27 KO’s) and VanNostrand (19-3-1, 12 KO’s) had met once before, at GLORY 55 in July last year. That fight was a technical affair slowed by extensive clinching; this rematch could not have been more opposite, with both fighters clearly looking for a decisive stoppage win.

Heavy fire was exchanged in the opening seconds of the first round and the two fighters, supremely fit, maintained that pace for most of the bout. Petchpanomrung’s timing and catlike reflexes allowed him to land heavy kicks and punches, but his unusually aggressive approach also allowed VanNostrand to land on him more frequently than most opponents are able to.

As energies waned in later rounds, Petchpanomrung found himself increasingly entering into clinches. He received several warnings for this before receiving a point deduction in the final round. That deduction changed what would have been a unanimous decision win into a Majority Draw.

GLORY rules do not allow for championship fights to go to an extra round, so defending champions will retain their titles in the case of a draw. Petchpanomrung thus made a third successful defense of his belt despite the result officially being a draw.

“VanNostrand is very tall and very awkward. I was agitated and frustrated with the clinching, but I prepared well. I’m ready to take on anyone next,” he said post-fight.

“I’m pretty sure I won that fight,” declared VanNostrand. “There was a lot of hugging and GLORY doesn’t allow that. I say we get that rematch right away.”

Earlier in the evening, John King moved up to Heavyweight with a bang by setting a new GLORY record for fastest knockout. King, of Amarillo, Texas, stopped Derek Loffer in just ten seconds, beating Michael Duut’s previous record of 12 seconds and setting a new one which will surely stay in place for a long time.