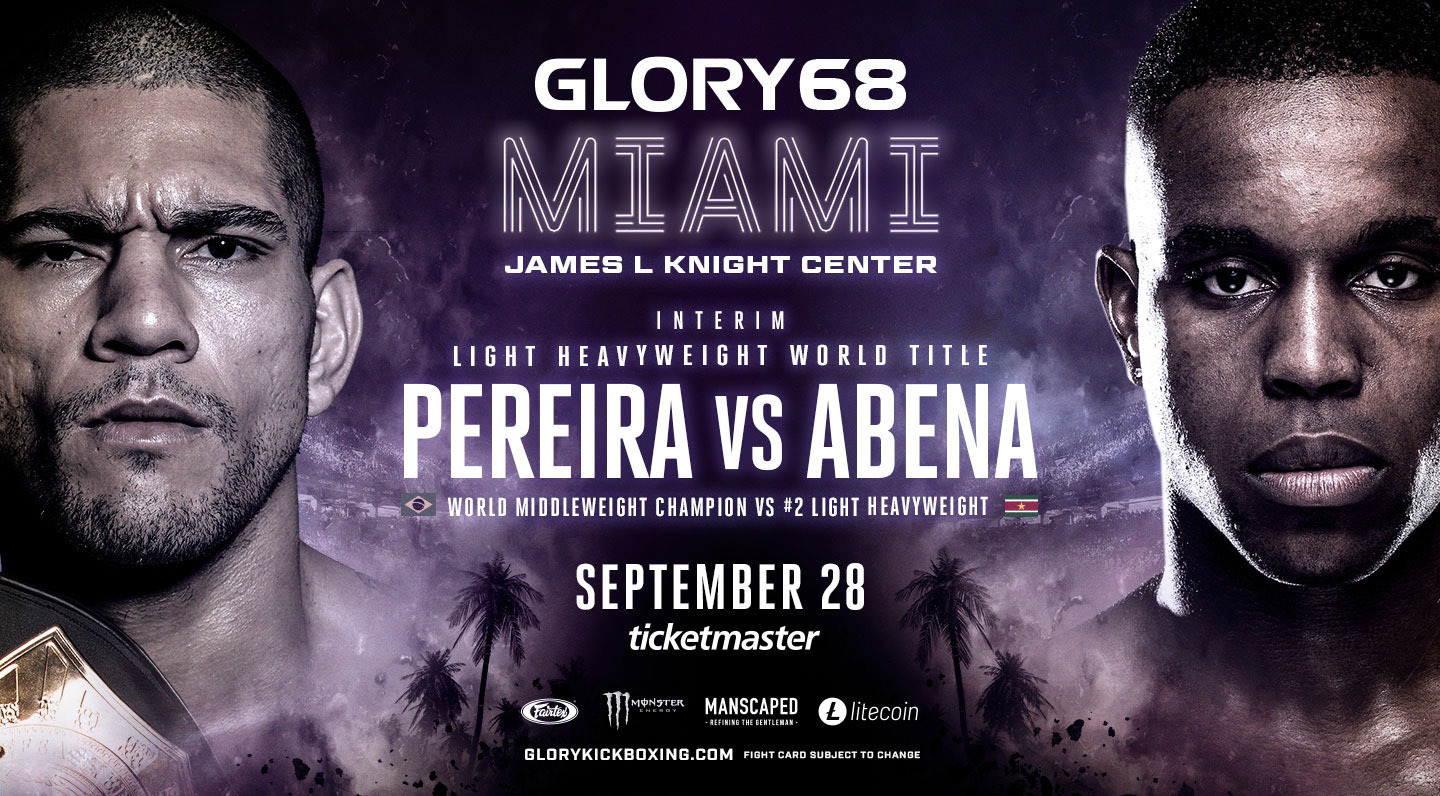 Brazilian standout Alex ‘Po Atan’ Pereira (30-6, 19 KO’s) is looking to make history when he enters the ring at the James L Knight Center in downtown Miami, Florida on Saturday, September 28 for the main event fight of GLORY 68 MIAMI.

Pereira, the reigning GLORY Middleweight champion, will be attempting to become the first fighter to hold title belts in the Middleweight and light-Heavyweight division simultaneously. Standing in his way will be Donegi ‘The Silverback’ Abena (24-6, 6 KO’s), of Suriname by way of the Netherlands.

Abena came out of that fight without injury and also strongly disputed the split-decision which went against him after a very close fight. Now the 22-year-old has a second chance to become the youngest fighter ever to win a GLORY world title.

“Pereira is the most dominant Middleweight champion in GLORY history and pound-for-pound probably the most dangerous striker on the planet today. The fact he’s moving up in weight to pursue a world title speaks volumes about his confidence,” said Marshall Zelaznik, GLORY CEO.

“In Abena, you’ve got one of the hungriest young fighters I’ve every come across. He endured a very tough upbringing and he channels that into his dream of becoming a world champion. Pereira has a distinguished career but this is the toughest challenge he’s ever faced.”

Fighting out of West Palm Beach, FL, the rising Featherweight prospect has gone 5-0 in GLORY and looks to build himself a 6-0 platform from which to call for a world title shot when he faces England’s Bailey Sugden (12-4, 2 KO’s) in what is a stiff test for both fighters.

Other key bouts on the card include a clash between former champions Tiffany van Soest of Riverside, CA and Jady Menezes of Curitiba, Brazil, with the winner edging back into the contender picture, plus Vancouver, Canada’s Josh Jauncey against Tel Aviv, Israel’s Itay Gershon and the return to the ring of top US prospects Troy Jones and b.

Tickets for GLORY 68 MIAMI first go on sale Wednesday, August 13 via an exclusive pre-sale available only to fans who register at GLORYKickboxing.com to receive the pre-sale password.

The full card for GLORY 68 MIAMI is as follows: