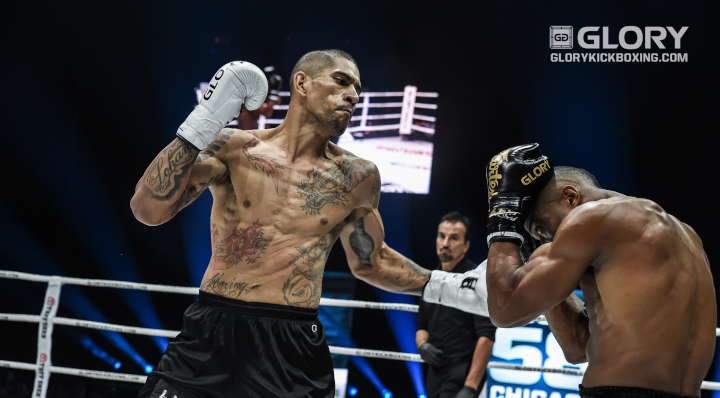 GLORY Kickboxing’s return to Chicago for its 58th event was Headlined by a Middleweight title clash between champion Alex Pereira (29-6, 18 KO’s) and the man he defeated to capture the belt, Simon Marcus (49-5-2, 27 KO’s).

The pair met previously at GLORY 46 in Guangzhou, China, with the Brazilian Pereira taking home a unanimous decision victory and the belt.

Pereira entered the rematch after back-to-back title defenses against Yousri Belgaroui, the latter of which came via highlight-reel, first-round knockout.

Marcus rebounded from his title defeat, demolishing Zack Wells at GLORY 52 and besting former champion Jason Wilnis at GLORY 56 in Denver to earn another shot at gold.

The pair patiently found their range in the first round. Pereira pressed forward, while Marcus fired low kicks. The champion cracked Marcus with a left hook on the inside, but the Canadian took it well. The referee warned both fighters for holding as they jostled for position in the clinch.

Marcus looked a head kick to open round two. The taller Pereira was able to evade and fire back with punches.

The Muay Thai stylist Marcus scored with knees from the clinch. He clipped Pereira with an overhand right, but the Brazilian walked right through it. Pereira connected with a right hand of his own in the center of the ring. Marcus finished the round strong with a left hand.

Pereira punished Marcus with a left hand and step-in knee to start the third round. The clinch work continued, as Marcus scored with more knees. Pereira delivered a spinning back kick to the body, but Marcus was able to block it with his forearm.

The champion fired three straight push kicks in the waning seconds of the frame, which Marcus countered with another heavy right hand.

The challenger looked to clinch to open the championship rounds. Pereira was willing to engage, landing knees and punches from inside. The pair separated briefly, allowing Pereira to fire a right head kick.

A left hook and left head kick wobbled Marcus badly. Pereira smelled blood and dropped the challenger with another left hook. Marcus recovered, but a flying knee split his nose wide open as the round came to an end.

Down on the scorecards entering the final frame, Marcus tried to push the action. Pereira did not sit back and wait, marching forward and attacking the Canadian. Bleeding badly, Marcus did not give in. He looked for any opening, but it did not present itself.

There was zero doubt on the scorecards, as Pereira retained the title with a unanimous decision nod.

“What makes all the difference is my will as a champion. I respect Simon Marcus a lot, he’s a tough fighter,” said Pereira. “Since I’ve fought Marcus before, I know he had holes in his game.”

As for what’s next, Pereira has his eyes set on a SuperFight with another GLORY titleholder, “I’d like to move up to 205 and fight Artem Vakhitov.”