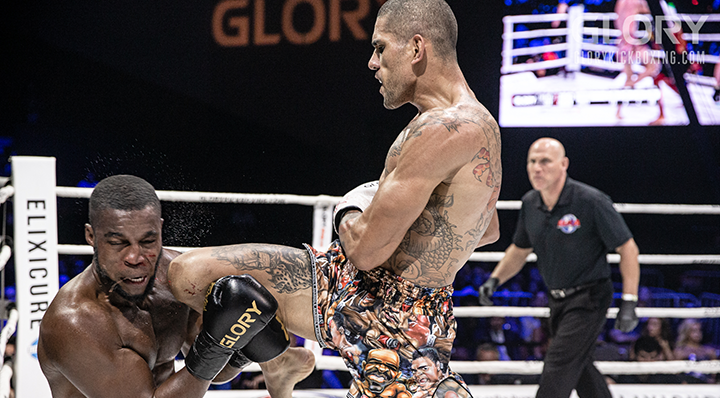 Vakhitov, currently sidelined as he recovers from a broken right hand, made a statement prior to this past weekend’s GLORY 68 MIAMI interim title fight between Pereira and Abena, saying that the interim “silver belt” was of no interest to him but that he would be ready to meet the winner when his hand is healed.

Pereira felt Vakhitov’s comments about a silver belt were calculated to be an insult.

“Oh it was his hand? I thought it was his nail. He broke a nail three times [so we couldn’t fight]. But now it’s his hand? OK, we can wait for the hand to heal,” he responded in a post-fight interview backstage at GLORY 68.

A clash between the two had been pencilled in by matchmakers once before, but Vakhitov breaking his hand at GLORY 66 nixed that and led to the creation of the interim belt which Pereira won this past weekend.

Fight fans across the world have expressed eagerness to see a showdown. The timeline for that title unification clash now rests upon the status of Vakhitov’s hand. In the meantime, Pereira remains also the Middleweight champion and is happy to defend either belt.

“My next fight depends on the GLORY organization. I have both belts and whatever they want me to do I will do,” he says.

Pereira stopped Donegi Abena in the third round of their GLORY 68 MIAMI main event contest by way of a knockout left hook from which he derives his ‘Po Atan’ (‘Stone Hand’) nickname.