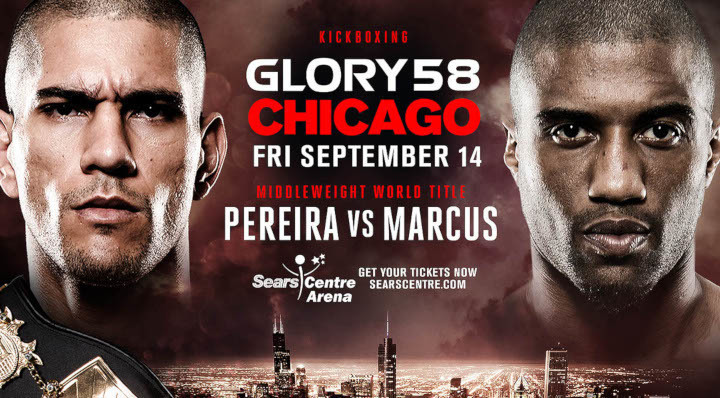 Middleweight champion Alex "Po Atan" Pereira (28-6, 18 KO, fighting out of Brazil) will be facing a familiar opponent at GLORY 58 Chicago, squaring off against Simon "The One" Marcus (48-4-2, 27 KO, fighting out of Canada) in a rematch of their bout that took place 11 months prior.

Last year at GLORY 46 China, Pereira managed to upset then-champion Marcus, signifying the start of his title reign and reversing the foes' roles as champion and challenger.

In the time since, Pereira has defended the belt twice, with Yousri Belgaroui serving as the opponent on both occasions. His most recent victory over Belgaroui came by way of highlight-reel knockout at GLORY 55 New York in July.

Meanwhile, Marcus picked up two wins of his own since dropping the belt to Pereira. The two-fight streak began with a first-round TKO of Zack Wells in March and culminated with a decision over longtime rival Jason Wilnis earlier this month at GLORY 56 Denver.

A Featherweight fight between No. 6-ranked Anvar Boynazarov (93-26-2, 54 KO, fighting out of Thailand) and 20-year-old prospect Bailey “Bad Boy” Sugden (11-2, 2 KO, fighting out of England) has also been added to GLORY 58 Chicago, completing the five-fight card.

The five-fight card for GLORY 58 Chicago can be found below:

GLORY 58 Chicago will be carried:

Before GLORY 58 Chicago gets underway, Heavyweight contender Junior "The Juggernaut" Tafa (18-3, 14 KO, fighting out of Australia) puts his No. 6-ranking on the line against heavy-handed Haze "The Hooligan" Wilson (24-3, 19 KO, fighting out of the United States) in the GLORY 58 SuperFight Series Headline bout.

The five-fight card for GLORY 58 SuperFight Series can be found below:

Recently-signed Mexican champion Abraham ‘Ham’ Vidales (11-0, 9 KO, fighting out of Mexico) risks an unblemished record when he faces Featherweight Niko Tsigaras (21-4, fighting out of the United States), a Brooklyn-based fighter by way of Greece and Uzbekistan.

The current four-fight GLORY 58 preliminary card can be found below:

Tickets for GLORY 58 Chicago, with prices ranging $35 - $170 are on sale now, available for purchase at searscentre.com and at the Sears Centre Arena box office.

GLORY 58 Chicago will be the promotion's fourth event during the Summer of GLORY 2018, a five-city campaign featuring can't-miss events in New York, Denver, Shenzhen (China), Chicago and Amsterdam.

For more information about GLORY and Summer of GLORY 2018, visit GLORYkickboxing.com.