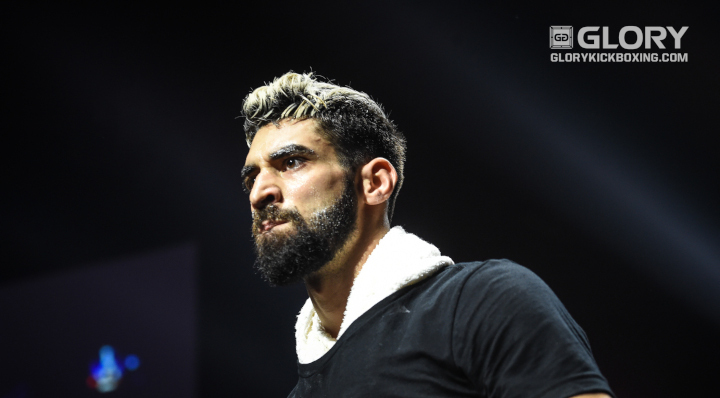 Canadian contender Josh Jauncey believes history is on his side as he prepares for a November showdown with Sitthichai in New York.
Lightweight champion Sitthichai (121-30-5, 32 KO’s) has been a dominant force in the weight class.
He has made five defenses of his Lightweight title and is 10-1 in GLORY, with the sole loss being a controversial decision against Robin van Roosmalen. He avenged that loss in their rematch and has been champion ever since.
Marat Grigorian, Chris Baya and Tyjani Beztati have all failed to dethrone Sitthichai. Now Jauncey will take his shot on November 2. It will be the second time they are meeting in the ring, but the first time Jauncey (29-8, 15 KO’s) is taking a shot at the belt.
“Our first fight [at GLORY 22] was in the final of a four-man tournament. For a tournament, you focus on your first opponent, because if you don’t win that fight you won’t even be fighting anyone else that night, so my gameplanning and training was all around that first opponent,” he recalls.
That opponent was first set to be Niclas Larsen, who then had to pull out with a leg injury. A replacement opponent was then found, but was unable to compete because he had unresolved issues with the French athletic commission stemming from a fight earlier in the year.
On the day of the fight, Jauncey got his third and final change of opponent. He, as he puts it, “dismantled” the Muay Thai stylist Djime Coulibaly and then met Sitthichai in the final, Sitthichai having stopped former champion Davit Kiria earlier in the evening.
“I went in there having never fought a Thai before and having had no southpaw sparring in camp, or gameplanning for Sitthichai, and I think I gave him probably the hardest time he had in GLORY up to that point,” says Jauncey.
“I think the only other fighter who has given him anything similar was Tyjani Beztati recently.”
“This time, I’ve had a full camp to gameplan and bring southpaws in to work with. It’s all a matter of preparation. For our first fight I was fit but that was all. This time I am fit but also have a strategy and five rounds in which to work.
“If you look at my recent fights you’ll see that I have been coming on stronger later in the fight and taking control of it. I think five rounds just adds to that, gives me more time to work with.”
Does Jauncey see any obvious weaknesses in Sitthichai?
“He’s technically sound and he works that left kick very well, he’s very good with that. But once you crack that, once you figure out your way past it, there are lots of options there to work with,” he says.
Jauncey has also noticed the strange phenomenon of downtown New York consistently being, for some reason, a graveyard of champions.
“I was reading a book about the history of the Heavyweight boxing championship and when it came to Madison Square Garden, so many champions went there and lost their belts,” he says.
“Then if you look at the last UFC there, they had three title fights on UFC 217 and all three defending champions lost. The first time in UFC history that three titles were lost on the same card.
“And in GLORY itself, It was an upset when I got stopped by Elvis Gashi last time I fought in New York. And look what happened to Robin van Roosmalen and Giorgio Petrosyan, both of them got stopped by Andy Ristie in MSG.
“So yeah, even though this fight is taking place across the street at the Hammerstein Ballroom rather than the MSG Theater, it’s still central Manhattan and yeah, I think we are due an upset.”
Jauncey challenges Sitthichai in the main event of GLORY 61 NEW YORK on Friday, November 2 at the Hammerstein Ballroom in central Manhattan, New York city.