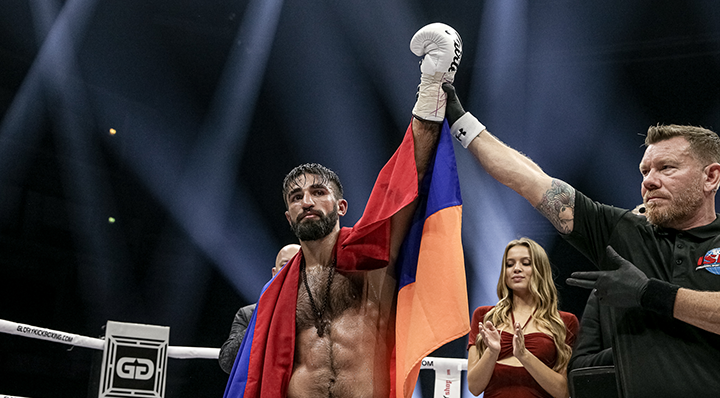 In the GLORY 69 main event in Düsseldorf, Lightweight champion Marat Grigorian (62-11-1, 1 NC, 35 KO’s) puts his title on the line for the first time against former title challenger Tyjani Beztati (19-4, 6 KO’s).

Grigorian got the better of Thailand's Sitthichai Sitsongpeenong at GLORY 65, dethroning one of the sport's most dominant fighters. Beztati earned a second crack at gold with a win over Josh Jauncey in his previous outing.

Beztati clinched and fired a knee to start the fight. He followed with a flying knee when the pair separated.

The towering Moroccan used his length to keep Grigorian at bay. The titleholder started to dictate the action, backing Beztati to the ropes. Beztati delivered long punches before blocking a head kick attempt from Grigorian. Beztati’s volume decreased as the round came to a close.

A knee from Beztati greeted Grigorian in round two. Grigorian answered with a heavy low kick and he ripped a left hook to the body of the challenger. Beztati tried for another jumping knee, but Grigorian was unfazed.

Grigorian continued to control the ring with his forward pressure. An overhand right from Grigorian appeared to hurt Beztati for a moment, but the Moroccan fighter circled away from further damage. The round’s final minute was a showcase of Grigorian’s skill, as he repeatedly connected with combinations along the ropes.

Round three began much like the second, as Grigorian marched forward and battered Beztati along the ropes. Beztati fired an uppercut and a follow-up left hook, but Grigorian’s pressure never wavered.

A right hand to low kick combination from the champion produced a noticeable grimace from Beztati along the ropes. A heavy left hand to the liver appeared to stun Beztati late in the round.

Grigorian went straight to work in the fourth round. He delivered a right hand and followed it with a left hand to the body. Beztati fell to the canvas and the referee gave him a count. The fight continued and Grigorian landed a barrage of uppercuts.

Beztati looked for a flying knee, but Grigorian stayed in close and peppered Beztati with punches. An overhand right from Grigorian was followed by more uppercuts, but Beztati somehow survived the round.

Beztati opened the final round with a jumping knee and then connected with a powerful right hand. Grigorian walked right through the strikes and backed Beztati to the ropes. A heavy leg kick from the champion hurt Beztati, but it was ruled a slip.

Beztati went for broke in the fight’s final minute, throwing a variety of power shots, but none did any damage.

The scorecards were simply a formality, as Grigorian successfully defended his title.

“It was good. Not my best performance, but I’m happy with the win,” said the champion.