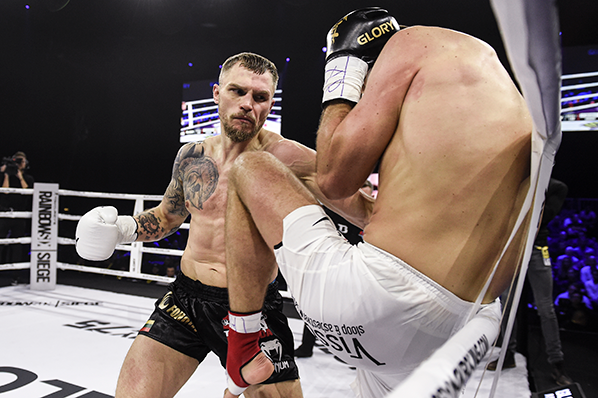 The card was Headlined by Lithuanian “Sledgehammer” Sergej Maslobojev (32-5, 21 KO’s) and Dutch slugger Roël Mannaart (26-3,13 KO’s) in a light Heavyweight battle. The fight began with an exchange of combinations, but a low blow from Mannaart paused the action. Maslobojev went after the body of the former Heavyweight Mannaart with kicks. He followed it with a heavy right hand that hurt Mannaart.

Another big shot from Maslobojev put Mannaart on the canvas against the ropes. A second knockdown came just seconds later. Mannaart could not recover after suffering a potential jaw injury and Maslobojev celebrated the dominant performance.

“I feel wonderful for myself, but I feel awful for my colleague,” said Maslobojev. “We train for everything, but we don’t wish for things like that.

“I knew we had to sit back and counter. My work was to have him come to me and give him my right hand. This was just one more stop up the hill. I want to fight everyone in this weight class.”

France’s Anissa Meksen (100-5, 33 KO’s) returned to the ring against South Korea’s Jiwaen Lee (25-5, 6 KO’s) in a Super Bantamweight clash. Meksen went straight to work with combinations. Lee landed a snapping jab, but Meksen countered with a body kick. The low kicks of the Frenchwoman repeatedly found the lead leg of Lee. A left low kick to left high kick from Meksen connected.

Lee appeared puzzled by the speed and movement of the former champion. A jumping switch kick from Meksen was blocked at the last second by Lee. Round two started with Meksen attacking with her left kick arsenal. She peppered the legs of Lee at every opportunity. Meksen battered the body of Lee with kicks from range. Lee struggled to find any sort of rhythm.

Between rounds, Lee could not put weight on her lead leg and was forced to retire. Meksen earned the centennial victory of her illustrious career with the dominant showing over the 22-year-old.

Lightweights Guerric Billet (33-4, 14 KO’s) and Artur Saladiak (20-9-2, 8 KO’s) locked horns in the card’s middle match-up. Poland’s Saladiak came out with power punches. Billet stayed on the outside and landed low kicks. A right hand from the Frenchman got through the guard of Saladiak. The power shots from Saladiak continued, but Billet used a high guard to deflect the strikes.

A big knee from Billet found the stomach of Saladiak and he followed it with a left uppercut. Billet changed levels with his strikes and pounded the body of Saladiak as the frame expired. A big right hand from Billet wobbled Saladiak early in round two. A left high kick moments later sent Saladiak to the canvas. He recovered during the count. Billet landed a jumping knee, but Saladiak managed to stay upright.

The Frenchman was patient in his assault, hurting Saladiak to the body and legs. It was obvious in round three that Saladiak’s lead leg was compromised from the low kicks of Billet. Saladiak did his best to generate offense off his back foot, but Billet methodically picked him apart. It was a great display of heart by Saladiak to make the final bell, but the result was never in doubt as Billet took the win.

In the second bout, Brazilian knockout artist Bruno Gazani (67-6-1, 33 KO’s) collided with Belgium’s Mohammed Hendouf (36-7-1, 8 KO’s). Hendouf fired kicks to try and establish range. Gazani was undeterred and powered Hendouf into the corner. The Brazilian landed a big knee and stunned Hendouf. The Belgian used a high guard and tried to counter the aggressive nature of Gazani.

They traded low kicks before Hendouf just missed with a jumping knee strike. Gazani worked the body late in the round. The pace picked up early in round two. Hendouf increased his output, and Gazani struggled to match him. The constant pressure of Gazani appeared to frustrate Hendouf. Late in the round, Hendouf sat down on his punches and swung wildly.

His output continued in the final frame. Gazani landed a big knee in the corner. Hendouf fought well off his back foot, firing with volume despite Gazani’s forward march. A big knee from Hendouf landed in the clinch. Gazani attacked the body in the fight’s final minute. Hendouf again fired wild power punches. They battled hard until the final bell and judges were left to make a decision. They were split in their verdict, but Gazani earned the victory.

The card kicked off with Germany’s Vincent Foschiani (8-5, 5 KO’s) clashing with Korea’s Sijun Jin (19-8-1, 10 KO’s) in a Featherweight match-up. Jin landed a left hook to start the contest. Foschiani backed the Korean to the ropes with a heavy right hand. He followed it with kicks and a strong left straight.

A big knee from Foschiani caught Jin in the midsection. Jin answered with a nasty body shot that hurt Foschiani badly. He landed a few more strikes along the ropes and Foschiani crashed to the canvas after a front kick to the midsection. The German survived the count and the fight continued.

The second stanza saw the pair trade power punches in boxing range. After exchanging push kicks, the pair began to clinch and were warned by the referee. A huge knee from Foschiani landed to the head of Jin and evened the fight heading to the final frame.

Foschiani caught Jin with a right hook to start the third round. He swarmed Jin along the ropes with combinations. Jin’s output waned as Foschiani marched forward. A series of body kicks from Foschiani further zapped the conditioning of Jin. The fight saw the final bell and the judges awarded Foschiani the decision win.