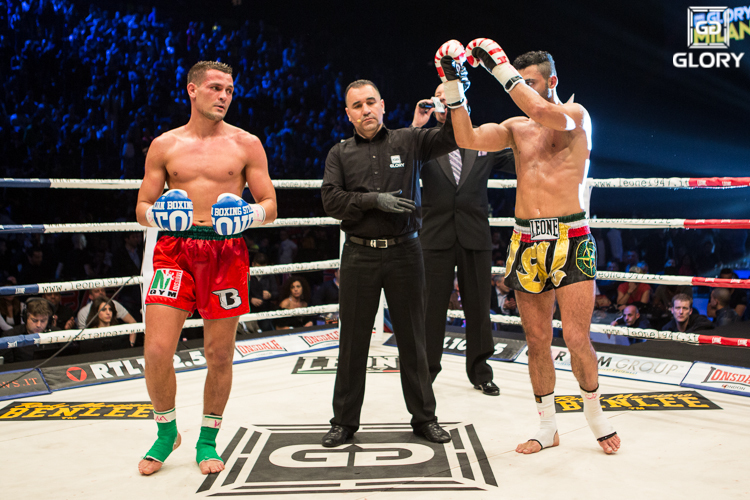 LIVE ON GLORYWORLDSERIES.COM FROM MEDIOLANUM FORUM

MILAN, Italy (April 20, 2013) –Giorgio “The Doctor” Petrosyan (78-1-1, 35 KOs) of Italy showed the fight world why he is the planet’s No. 1 ranked Lightweight (70 kilograms/154 pounds) kickboxer, scoring at will on superstar Hafid El Boustati (67-8-3, 19 KOs) of Morocco, to earn a unanimous decision victory in the main event of GLORY 7 Milan at Mediolanum Forum in Milan, Italy on Saturday, April 20, live on GLORYWorldSeries.com and on television in 78 countries around the world.

Petrosyan worked from the outside, moving away from El Boustati’s power and firing with crisp punch combinations and round kicks to the body and leg of El Boustati.  El Boustati attempted to rally and get inside repeatedly, but it was to no avail as Petrosyan’s tremendous reflexes and athleticism allowed him to circle out of danger every time.

In a thrilling see-saw war, Robin van Roosmalen (29-5-0, 19 KO’s)of The Netherlands rallied brilliantly after sustaining a cut from the relentless knee attacks of Murthel Groenhart (53-15-3, 29 KO’s) of Suriname in the first round of their Lightweight co-main event.

Van Roosmalen suddenly unloaded a powerful right hand to the head to stop Groenhart’s momentum and put Groenhart down for a partial count in the first round.  From there, van Roosmalen assumed control over the tempo of the fight while Groenhart gradually slowed down, allowing van Roosmalen to walk away with a unanimous decision win.

GLORY World Series (www.GLORYworldseries.com) is the world's premier kickboxing league, producing live events across the globe and offering up to $2 million in prize money to the winners of one-night, 16-man ‘Grand Slam’ tournaments and 8-man ‘Slam’ tournaments,  which are open to only the best fighters in each of six different weight classes. The fight series also includes events with traditional, single bouts.

With television deals spanning every continent, online live video streaming of all shows and the world's largest online martial arts library, GLORY is one of the world's most widely distributed sporting organizations.

Owned and operated by GLORY Sports International (GSI), the organization has offices in the UK, Netherlands, Japan, Malaysia, Singapore and the US. Its personnel include an unprecedented mix of accomplished entrepreneurs and senior level executives from the diverse worlds of finance, sports marketing, television and martial arts fighting.

In 2013, GLORY launched the Road To GLORY tournament fight series to identify and develop new kickboxing talent in the United States, Japan and elsewhere around the globe into future champions and superstars of the sport.