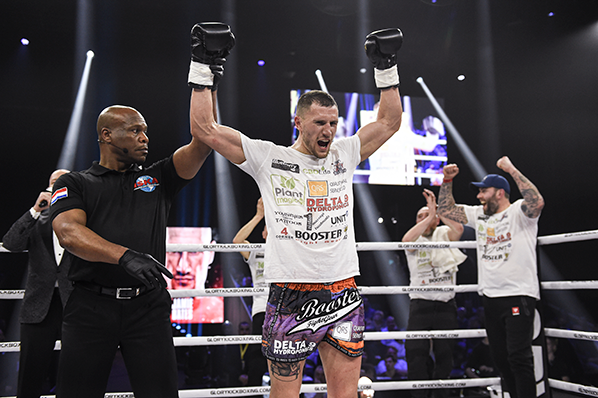 Styben countered with punching combinations and the pair exchanged back kick attempts. Belgaroui delivered a heavy knee to the stomach of Styben along the ropes. A clean right hand from Belgaroui got through Styben's guard and Belgaroui sensed Styben was hurt, prompting him to unleash power shot after power shot along the ropes.

Styben barely stayed upright in the corner, but managed to survive the round. In round two, Belgaroui backed Styben to the corner and battered the German fighter with knees and punches. Styben was forced to take a knee, blood pouring from his nose as he did so. The condition of his nose prompted a call for the ringside doctor to attend. One look was all it took for the fight to be halted.

“I love everyone who came out to watch the fight,” said Belgaroui. “Positivity is everything. From the first spot of blood I saw, I wanted to eat him, like a shark. He stood there and took everything.

“I call for a title fight. [Alex] Pereira, this war isn’t over. I’m going to get you, no matter the division.”

Palandre threw kicks from range to start the fight while Beztati remained patient, looking for openings. He went for a wheel kick when he saw a chance, but it missed its mark. A left hook thrown as a counter shortly afterward did find its mark though and that allowed Beztati to put Palandre on the ropes and unload with power punches and hard low kicks.

A noticeable urgency suffused Palandre in the second round but it didn't last once Beztati started finding openings again. Punches and knees began picking the Frenchman apart and for every shot Palandre landed, he found himself eating combinations in response. Heavy shots came in from Beztati and Palandre's forearms bore the brunt of some ferocious kicks.

Returning to his corner between rounds, Palandre indicated an issue with his left forearm. A doctor's examination determined that it was fractured, sending Palandre to the hospital and Beztati to the winner's circle.

“It’s an amazing feeling. Thanks everyone for the support,” said the victorious Beztati. “I’m happy with the ‘W’, but there’s always room for improvement. I want to claim another title shot by the end of the year.”

As expected, Grigorian powered forward into range against the taller and longer Bates, who fired kicks out to try and keep the fight at his preferred range. Staying active, Bates was able to continually make Grigorian cover up and defend, despite going backwards for most of the fight.

When Grigorian did get into range he let rip full force though, including a great left left hook to the liver which looked thunderous but had no visible effect on the provenly durable Bates.

Controversy descended early in the second round when the referee intervened to break up a tangle in a corner of the ring. He had already called break when Grigorian fired off a huge overhand right which landed cleanly on Bate's jaw and sent him crashing to the canvas.

It looked like being a textbook Grigorian knockout, albeit one which took place possibly in breach of the rules. Bates hit the canvas, briefly struggled to regain his feet and looked out of it. The fight seemed to be over - until Bates suddenly made a Tyson Fury-esque rise from the canvas and declared himself able to continue the fight.

Grigorian escaped penalty for the right hand which knocked Bates down and, having lost the first round, took control of this second round, with Bates heavily on the defensive. The fight was thus tied going into the third and final frame, during which Bates continued fighting on the back foot but was much more successful at evading Grigorian's output while landing counters of his own.

At the final bell, the decision was either fighter's. Grigorian landed the power shots but Bates landed more volume and the cleaner blows. The judges were unanimous in seeing him as the winner, making for an early contender for 'Upset of the Year 2020': Grigorian, the former champion, is ranked #2 while Bates came in as the #9.

“What an honor to share the ring with Harut, he’s a legend,” said Bates. “He rocked me, but I had time to recover. I improve with every fight. And by the end of the year I want Cedric [Doumbe] and Murthel [Groenhart].”