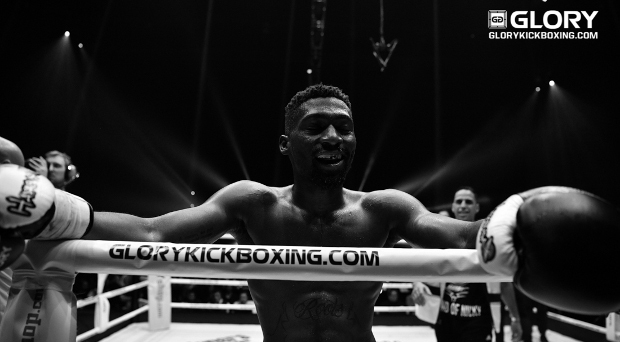 Cedric Doumbé shocked the world on Saturday night when he took the Welterweight title from Nieky 'The Natural' Holzken at GLORY: COLLISION.

Holzken (90-12, 46 KO's) went into the fight expecting to make his fourth successful title defense and in the process set a new GLORY record of 13 consecutive wins. But it was not to be. Ever since calling Holzken out at GLORY 28, Doumbé (65-4-1,39 KO's) had predicted victory for himself with total confidence, and he made good on his promises.

“First of all I want to thank Nieky because to do a great fight takes [two]. So thanks Nieky, you are a very big fighter and very big champion,” Doumbé said as he reflected on his enormous win.

“This fight was not 'difficult' [as such] but I had to think a lot, I was very smart in this fight. I did everything my coach told me to beat Nieky. I wanted to knock him out, I was thinking the third round would be nice, but Nieky is very closed, very strong and very smart.”

Holzken came to the ring as GLORY's most successful fighter, his 12-fight win streak already a record. But Doumbé says he was not overwhelmed. “When I was walking to the ring I was thinking, 'enjoy your fight, he is just a man like you, so enjoy it like every fight before'”.

It didn't all go his way though. Doumbé recalls when a moment of worry crossed his mind. his jab. “His jab was very fast. I was thinking, 'f—k, I cannot escape this jab!' But after the third round it slowed. What I did well? Moving, playing, joking with him. I just did my best. I stayed myself.”

His act of giant-killing over, talk has already turned to his next fight, his first title defense. Obvious names are Murthel Groenhart, who he beat at GLORY 28, and Yoann Kongolo, who owns two decision wins over him.

Doumbé knows who he expects it to be. “At GLORY 37 there is a Welterweight tournament and I think Kongolo will win that. So I think Kongolo is the next for me... and Kongolo, you are not ready my friend!”