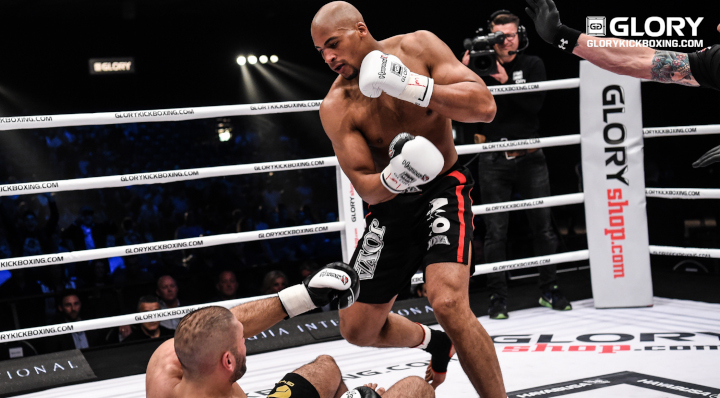 Heavyweight slugger D’Angelo Marshall (17-3, 9 KO’s) has issued a “personal hit list” of fighters he wants to challenge in the near future.
Rico Verhoeven, reigning Heavyweight champion, occupies the #1 spot, with Badr Hari at #2 and Jamal Ben Saddik at #3.
This week Marshall is in the USA, where he will face American newcomer Antonio Dvorak at GLORY 56 DENVER.
“After Denver I want to challenge Rico for the title he holds, but to be honest I would like to face Badr first, but only in the Amsterdam Arena,” he says.
“You know why? Badr will immediately understand this. Its a very symbolic place, this arena, where actually the good met the bad. For me its an opportunity to show Badr and of course the rest of the audience what our sport really stands for.
“My personal hit list is Rico, Badr and Ben Saddik, [who is like a] ‘B’ [version of] Badr.”
Marshall recently returned to training under Mousid Akrimane at Mousid Gym in Amsterdam, departing Utrecht’s Colosseum Gym, where he had trained under Danny de Vries and the rest of the team.
Colosseum, being located in the center city of the Netherlands, has become a gym where fighters from all over the country meet up regularly for open sparring.
Heavyweight champion Rico Verhoeven often drops in and it was there that Marshall was able to get regular rounds with him. He admits that Verhoeven got the better of their sparring sessions but says he’s now in position to take a serious run at the champion.
“I know that when I keep training like I am training now, I will be able to dethrone Rico, whether you guys like it or not. And I know Rico knows its possible. Rico knows what talent I bring,” he says.
“We already sparred and he was kind enough to give me advice that I still appreciate him for. He did the right thing to give me more time to prepare myself for him. He and his trainer know that I am surrounded now by the right people now and I am working very, very hard to get to that next level.
“Rico is a competitive guy. If I keep winning, I am sure he wants to test himself, especially against this right hand. I am confident that in a GLORY championship fight I will win. I have more speed.
“Its up to him. I am ranked #3 now, he recently fought the #7 [Brestovac], so I know if I keep winning, I will get the opportunity… My ambition is to become the first Dutch Antillian-Surinamese Heavyweight champion of the world!”
GLORY 56 DENVER takes place this Friday, August 10 at the 1ST BANK CENTER in Broomfield, Denver, USA and is Headlined by Artem Vakhitov defending the light-Heavyweight title against Danyo Ilunga.
Marshall and Dvorak are on the SuperFight Series card, which streams live worldwide via UFC FIGHT PASS from 9.30 PM ET