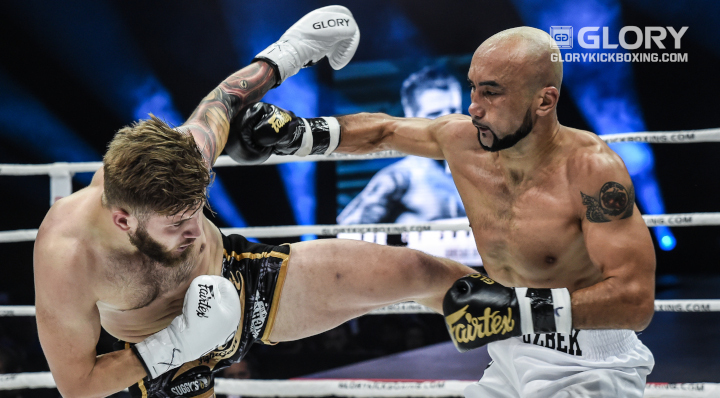 England’s Sugden came out throwing with volume, following Boynazarov, a power-punching Uzbekistan native, around the ring. Sugden’s volume was apparent early, as he changed levels with his punches.

A flying knee from Boynazarov hurt Sugden along the ropes. A left hand appeared to put Sugden down, but the referee surprisingly called a slip. Sugden recovered and went back to firing combinations in closely contested opening frame.

Boynazarov sat back and looked to counter the forward advance of Sugden. He caught a kick from the 20-year-old Brit and was warned by the referee. A spinning back kick from Boynazarov just missed the mark.

A pair of left head kicks from Boynazarov were blocked by the high guard of Sugden. A wayward flying knee from Boynazarov was countered with a series of punches from Sugden. The round ended with a firefight in the center of the ring, with Boynazarov again wobbling Sugden with a right hand.

The final three minutes opened with a much more aggressive Boynazarov. He walked down Sugden and delivered a jumping knee along the ropes. The Uzbek cracked Sugden in the ribs with a pair of kicks, but the British fighter was unfazed. They traded short knees in the clinch and swung wildly to the final bell.

The judges were called on to award a victor and they were split in their verdict. Three of the judges rewarded Boynazarov for his work, snapping his three-fight skid.

“I like this fight so much. I want to be GLORY champion. I want to [rematch] Kevin VanNostrand,” said Boynazarov. “[Bailey is] a tough fighter. I’m so happy.”