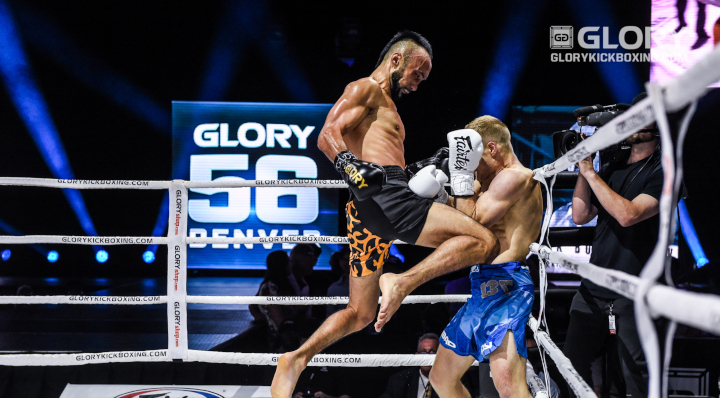 Boynazarov confident he can stop Sugden in Chicago

Anvar Boynazarov is heading to Chicago next week to take on English Featherweight Bailey Sugden at GLORY 58.
He’s confident he can stop the young prospect, given his previous form in the GLORY ring.
“Bailey Sugden I don’t really know a lot about, but I’ve already knocked out Fabio Pinca, probably the best fighter in this division, a Muay Thai legend,” he says.
“So it doesn’t really matter what level Bailey is at. What matters to me is accepted the fight. I respect that, because usually fighters are too worried about getting knocked out.”
Boynazarov comes from Uzbekistan but has spent years living and training in Thailand. He’s also previously lived in California and will be returning there soon to take up a place with Team Alpha Male.
TAM is a fight team based in Sacramento, California and headed by UFC veteran and former WEC champion Urijah Faber.
“I trained with Team Alpha Male in the past, at Urijah Faber’s gym. Soon I’m planning to move there with my family, and to continue my career in the US.”
GLORY 58 CHICAGO takes place Friday, September 14 at the Sears Center in Hoffman Estates, Chicago, Illinois.
Boynazarov faces Sugden in the opening fight of the Main Card, which airs live in the US on ESPN 3 at 9.30 PM Central Time.