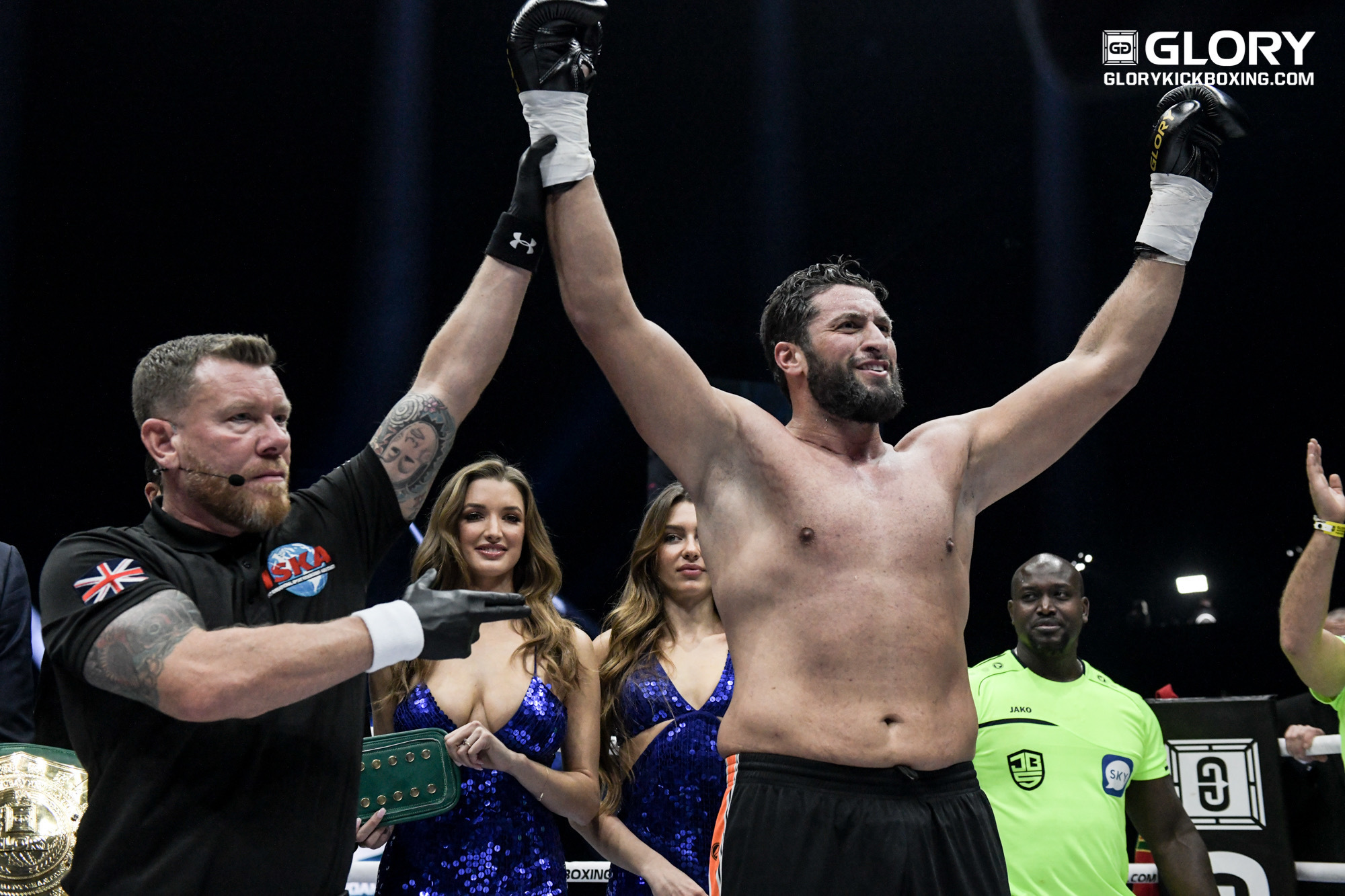 GLORY Kickboxing returned to the Rotterdam Ahoy in the Netherlands for its 62nd fight card and final event of 2018.

The event featured a one-night, eight-man Heavyweight tournament featuring $150,000 in prize money and a future title showdown with champion Rico Verhoeven in 2019.

Adegbuyi landed a low blow, causing a brief pause in the action. Ben Saddik then ripped a left hand to the body. He then cracked Adegbuyi with a series of left uppercuts through the guard of the Romanian.

As blood poured from Adegbuyi’s nose, Ben Saddik saw an opening and went for the kill. He crushed Adegbuyi with more left hands along the ropes, sending him to the mat.

Adegbuyi managed to get to his knees, but could not stand and the fight was stopped, handing Ben Saddik the tournament crown.

“I hurt my hand, but I just changed my game plan,” said Ben Saddik of his sudden propensity for using his left hand. “This win is for the fans. Without them, there is no GLORY.

“I am the Goliath. I know I can do this. This was nothing new for me. I want to fight Rico again. It’s 1-1 and I hope Rico accepts the fight.”

In the other half of the bracket, Jamal Ben Saddik took on Guto Inocente (36-10, 17 KO’s). The fight was a rematch of their meeting at GLORY 39 in March of 2017. Ben Saddik used his size to keep Inocente at range.

Inocente looked for a flying knee, but caught a stiff jab on his way into the pocket. A body kick from Ben Saddik connected and he followed with a heavy right hand. Inocente was clearly hurt and blood poured from the Brazilian’s face after a knee from Ben Saddik.

The referee paused the action and asked the doctor to look at Inocente. The fight continued, but the first round clearly belonged to the Moroccan. Inocente opened round two with a question mark kick, but Ben Saddik evaded the strike.

Ben Saddik was patient from the outside, scoring with kicks. The referee warned Inocente for holding. The round closed with a devastating right hand from Ben Saddik.

Down on the scorecards and visibly battered, Inocente was desperate in the final round. He looked for any opening in the defense of Ben Saddik, but he would not find it.

Inocente was deducted a point for holding in the fight’s final minute, but it had no impact on the result as Ben Saddik swept the scorecards en route to the final.

“The gameplan worked,” said Ben Saddik. “I want to give the audience a good show. I hope they enjoy the fight.”

The pair first met in the GLORY 24 contender tournament final, which Adegbuyi won by split decision. They met again at GLORY 58, with Adegbuyi again winning on the scorecards. The third meeting opened with Wilnis plodding forward.

Adegbuyi connected with a heavy kick to the body as he fought to stay in the center of the ring. The Romanian switched stances to deliver the kick yet again. Wilnis absorbed a heavy uppercut and right hook as he got into boxing range.

Wilnis crushed the body of Adegbuyi with a left hook, as he continued to pressure until the bell. In round two, the pair traded heavy punches in the pocket. Adegbuyi picked up his pace and rocked Wilnis with an uppercut along the ropes.

He followed it with a right hand and Wilnis wobbled badly. A head kick from Adegbuyi was partially blocked, but Wilnis was clearly hurt. Somehow Wilnis managed to stay on his feet to close out the round. Wilnis appeared to recover between rounds and came out firing in round three.

Adegbuyi returned to southpaw and clipped Wilnis with a head kick. Wilnis pummeled the body along the ropes. Adegbuyi countered with a hook before the pair started trading low kicks. Another head kick from Adegbuyi landed, but Wilnis stayed upright.

That was short lived, however, as Adegbuyi went back to the well and turned out the lights on Wilnis with one final head kick to earn his place in the finals.

“He’s a tough fighter,” said Adegbuyi of Wilnis. “Now I must rest and be mentally strong.”

A spinning backfist attempt from the Brazilian connected with the forearm of Abdallah. Abdallah scored with a straight left hand as he powered forward against his smaller opponent.

A flurry from the German closed out the opening stanza. Inocente fired another spinning kick to open round two. He followed that with a flying knee from the corner.

Abdallah’s advance neutralized the wild techniques of the Brazilian. The pair were warned for holding midway through the fight. Inocente delivered a flurry of punches and a jumping roundhouse kick to finish the frame.

The body shots of Inocente paid dividends in the final round, as Abdallah’s pace slowed. A front kick from Inocente knocked out the mouthpiece of Abdallah. Inocente continued to mix in flashy attacks until the final bell, which did enough to convince the judges of his victory.

Dutchman Jahfarr Wilnis entered the tournament as the third seed and squared off with Slovakia’s Tomas Mozny (20-8-1, 6 KO’s).

Wilnis marched forward early, but Mozny used his jab to stay at range. Mozny found himself backed into the corner, but his straight punches landed with regularity. The Slovakian delivered a heavy knee late in the opening round.

Round two began much like the first, as Wilnis pushed Mozny into the corner. Mozny continued to counter with volume combinations. Wilnis cracked Mozny with a heavy right hand and followed it with an uppercut.

A flying knee from Wilnis briefly wobbled Mozny, but the lanky fighter stayed upright. Mozny remained busy, but the pressure of Wilnis was the story of the middle round. The power punches of Wilnis took their toll in the fight’s final frame.

A left hand from Wilnis opened a cut under the left eye of Mozny. Wilnis stayed right in front of Mozny until the final bell, scoring with heavy shots. The judges were split, but Wilnis earned a spot in the semifinals.

Tafa went after the lead leg of the towering Moroccan early. Ben Saddik delivered a big knee to slow Tafa’s advance. Tafa suffered an equipment malfunction as Ben Saddik connected with his cup.

The Australian swung wildly, but Ben Saddik was able to stay at range and land kicks to the midsection. A body shot dropped Tafa and produced a count from the referee. A second kick to the body sent Tafa down again and the fight was waved off, allowing Ben Saddik to move to the semifinals.

Adegbuyi, a multiple-time title challenger and tournament winner, looked to use his experience to edge his Polish opponent. Wrzosek tried to use his kicks to keep range, but Adegbuyi quickly walked him down.

He hurt the Polish fighter with a body shot, but Wrzosek did not go down initially. Adegbuyi smelled blood and another liver shot sent Wrzosek to the canvas. The newcomer managed to recover and survive the round.

A massive left hook from Adegbuyi wobbled Wrzosek early in round three and he followed it with another body shot that dropped the Pole again. Wrzosek again recovered, but he could not stop Adegbuyi’s forward advance.

A desperation front kick from Wrzosek clipped Adegbuyi late in the fight, but it was too little, too late as Adegbuyi took the decision and advanced to the semifinals.