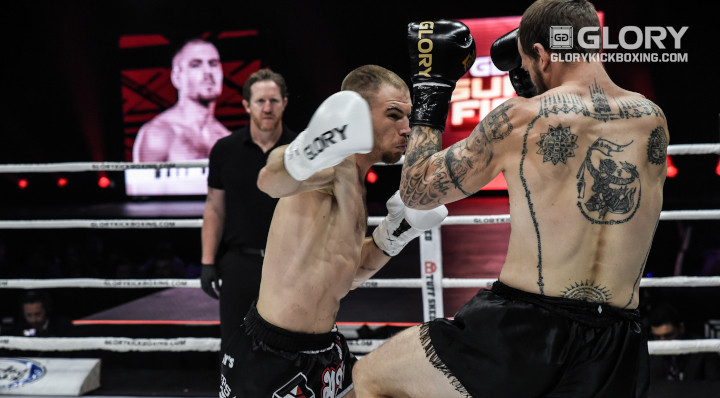 Baker finishes Jenkins in third round at GLORY 58

The eighth-ranked Baker went to work early, looking to spoil the GLORY debut of Jenkins. Baker pushed Jenkins into the corner, attacking with punches.

Jenkins answered with low kicks. He looked for a liver kick, but Baker countered with a heavy straight to back him up. The towering fighters exchanged knees in the clinch with regularity. The round closed with a solid right hand from Baker.

Jenkins came out firing in round two. He peppered Baker with short shots from inside boxing range. A right hand from Jenkins put Baker against the ropes for the first time.

A head kick attempt from Baker buzzed over the head of Jenkins, drawing a big reaction from the crowd. Baker delivered a heavy right hand of his own, prompting blood to flow from the nose of Jenkins.

As time wound down in the frame, Baker cracked Jenkins flush on the jaw with a right hand, sending Jenkins to the canvas.

There was a sense of urgency from Jenkins to open the final round. He came forward with punches, slowing the output of Baker. It was short lived however, as Baker against dropped Jenkins with a right hand.

Jenkins laid face down for a moment, but managed to work back to his feet. Baker went for the kill, landing one last combination to put Jenkins down for good.

The Team Black product Baker earned his second victory in the GLORY ring. “It took longer than I wanted to wake up,” admitted Baker.

“I have to stay dedicated. When I win, you have to look at my team and what they do for me. Whatever GLORY gives me, I’d ready to go.”