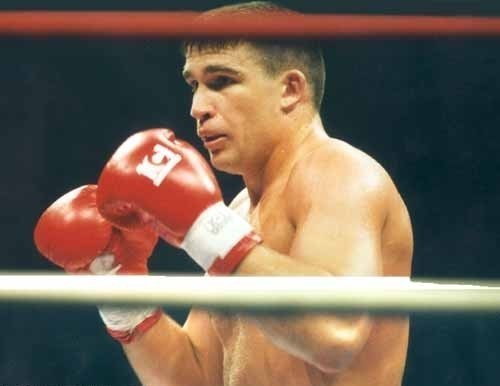 Aerts vs The Goliath: Age Is Just A Number

They don’t call Jamal Ben Saddik ‘The Goliath’ for nothing. At 6'6" (2.05m) and 260lbs (118kg), he is the second-biggest fighter in GLORY, with only Heavyweight champion Semmy Schilt standing taller than him.
At just 22 years old, Ben Saddik (24-2-0, 20KO’s) is also one of the youngest fighters in the Heavyweight division. But he is no respecter of age or records, as he revealed in interviews he gave before his GLORY debut in October last year.
“The time of the old men is over, guys like Remy Bonjasky and Peter Aerts, they are finished. Give them to me and I will knock them out,” he remarked controversially. Veteran champions like Aerts and Bonjasky are not used to being called out by young unknowns.
It wasn’t long before Ben Saddik got a chance to back his words up. He met Remy Bonjasky in the quarter-finals of the Heavyweight Grand Slam on New Year’s Eve and, while he didn’t knock him out, he did win a solid decision to prove that he hadn’t been making empty boasts.
On Friday, Ben Saddik will be asked to back his words up again. This time he faces Peter Aerts at GLORY 8 TOKYO. Its the same city in which he beat Bonjasky but he faces a very different kind of fight. Aerts, the most veteran fighter in the GLORY Heavyweight division, is a quick starter and is more than used to facing giants.
Aerts isn’t a small man -  he stands 6'2" (1.92m) and weighs 238lbs (108kgs) - but he faces a considerable size and weight disadvantage. Ben Saddik also has youth on his side; aged 22, he is a full twenty years younger than Aerts As if that wasn't enough, Ben Saddik has also recently had surgery to correct a dysfunctional thyroid gland which had been causing him problems with low energy and weight gain.
But while Aerts (102-30-1, 77 KO’s) may be aged and battle-scarred, he has a lifetime’s experience. In particular his experiences fighting Semmy Schilt will prove useful. Schilt is the biggest, tallest kickboxer in the world; Aerts has faced him five times and taken three wins.
To do the same against Ben Saddik on Friday, Aerts will have to overcome his opponent’s multiple advantages. He needs to find the route to victory and the body might be where it lies. Ben Saddik has size and power but his conditioning has been suspect in previous fights. Aerts will test it to the maximum with a fast pace and lots of heavy power shots.
There may also be a lesson in Ben Saddik’s loss to Daniel Ghita, which literally knocked him out of the Heavyweight Grand Slam Semi-Finals. Ghita stopped him just ten seconds into the match with a perfectly placed body-kick and that won’t have gone unnoticed by Team Aerts.
Ben Saddik is a giant of a man and a real handful for anybody but this fight is a huge test for him. He is facing one of the most decorated veterans in the game, a man who is scared of nobody. Aerts has seen it all before and his list of wins reads like a kickboxing Hall of Fame.
There’s a famous saying about fighters: “Its not about the size of the dog in the fight, its about the size of the fight in the dog” - no fighter anywhere can match an old dog like Peter Aerts for heart and spirit. But will he be able to teach the young pup some new tricks? We will find out at GLORY 8 TOKYO on Friday May 3.