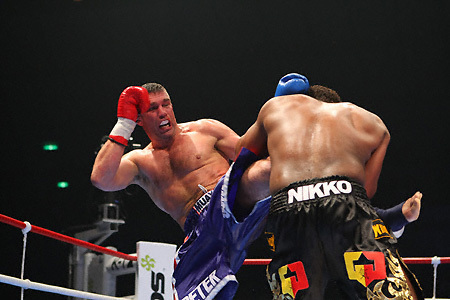 GLORY 8 TOKYO was an epic show, highlight being the world’s top eight Heavyweights in a one-night tournament. It also featured a clash of generations as old guard Peter Aerts and Albert Kraus met new blood Jamal Ben Saddik and Andy Ristie. The fights did not disappoint.

Not long ago, Ben Saddik was dismissing Aerts and his fellow veterans as “old men”. Yet Ben Saddik still finds himself outside the Top Ten of the GLORY World Federation rankings and can only watch while the veteran warhorse Aerts climbs 140 points to #5 thanks to a thrilling three-knockdown win over the young prospect in what was a Fight of the Year and Comeback of the Year contender.

Aerts’ fellow Heavyweight veteran Jerome Le Banner was also in action at GLORY 8. He and Koichi staged a re-run of their New Year’s Eve fight. Koichi lost that one by KO; this time he managed to go the distance but it was still one-sided. Le Banner climbs to #7 and gains 107 points; he and Aerts didn’t do badly for old men.

Lightweight contenders Andy Ristie and Albert Kraus were supposed to fight in March but that meeting got cancelled and the fight had to be delayed. Ristie got over his initial disappointment by knocking Kraus out with a huge knee shot. Kraus drops two places to #6 while Ristie gains 189 points, propels himself to #3 in the world rankings and knocks Davit Kiria down to #4 in the process.

The Lightweight division also saw Japanese veteran Yoshihiro Sato bounce back from the disappointment of his last GLORY outing, a stoppage loss to young Swedish prodigy Sanny Dahlbeck, by beating Sunghyun Lee (who usually fights at Featherweight) to score 61 points and move up from #14 to #12.

Centerpiece of the Tokyo event was the eight-man single-elimination Featherweight tournament. World #1 Mosab Amrani was eliminated by decision at the semi-final stage and world #3 Liam Harrison went even earlier, exiting via a cut in the quarter-final stage. Amrani drops to #2; Harrison retains his #2 spot but the points gap is closing on him.

Both were defeated by ‘The Amazing’ Masaaki Noiri, who is just 19 years old and entered the tournament as #8 seed. His wins booked him a spot in the final opposite Yuta Kubo. Eventually he lost the Grand Final by decision - but he won the battle of hearts and minds.

Fans were impressed with his stoicism after taking a terrible low blow at the end of the Grand Final first round. Had he declared himself unable to continue he would actually have been declared the winner of the fight and thus the winner of the tournament, but Noiri considered this an unacceptable way to win.

The tournament was ultimately won by Yuta Kubo, who already held a win over Noiri from a previous encounter. Low-blow aside, Kubo’s performance in the tournament was excellent. He gains 360 points and moves into the #1 spot previously occupied by Amrani, now at #2 and with Kubo standing 166 points clear.

As for Noiri, he climbs to the #5 spot previously occupied by South Korean standout Chibin Lim, who drops two places to #7. Canada’s Gabriel Varga made the semi-finals and retains his #6 rank but Brazil’s Marcus Vinicius, who exited in the quarter-finals, drops one place to #8.