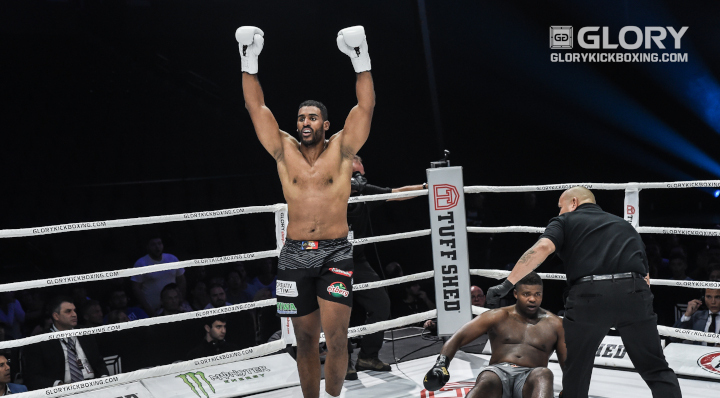 The pair first met in the GLORY 34 DENVER Contender Tournament final, with Romania’s Adegbuyi edging the Dutchman Wilnis by way of a split-decision that Wilnis strongly disagreed with. Chicago was his chance to set the score straight.

It was the two-time title challenger Adegbuyi who applied the offense early. He attacked the body of Wilnis with kicks and followed it with his jab. Wilnis stepped inside and looked for his lead hook.

A right uppercut from Adegbuyi was matched with step-in knee from Wilnis. Wilnis scored with an uppercut of his own, then went to work on the body of the Romanian. A right hook from Adegbuyi stopped the advance of Wilnis and he followed it with another uppercut.

Adegbuyi fired punch combinations to open round two. Wilnis slowly marched forward, pushing Adegbuyi into the corner. Adegbuyi landed a knee from the inside, backing Wilnis up a bit. Wilnis continued to pressure, but did not throw with volume.

The uppercut from Wilnis again found its mark. An awkward exchange saw Adegbuyi earn the fight’s first knockdown. Wilnis tried to argue, then came forward recklessly and was knocked down cleanly as the round closed.

Wilnis powered forward in round three. He fired punches to the body as Adegbuyi used a high guard to cover his head. The low kicks of Adegbuyi did little to stop the advance of Wilnis, who again pushed the fight to the corner.

Wilnis went head-hunting with his uppercuts in the fight’s final minute. Adegbuyi remained calm, absorbing the punishment and capturing the decision victory.

All five judges saw it the same, scoring it 29-26 for Adegbuyi.

“I threw a left hook and he went down!” was Adegbuyi’s straightforward take on the fight’s first knockdown.

Asked what’s next for him, the Romanian slugger responded, “I want Rico. I want Badr Hari. Just give me the best fighter.”