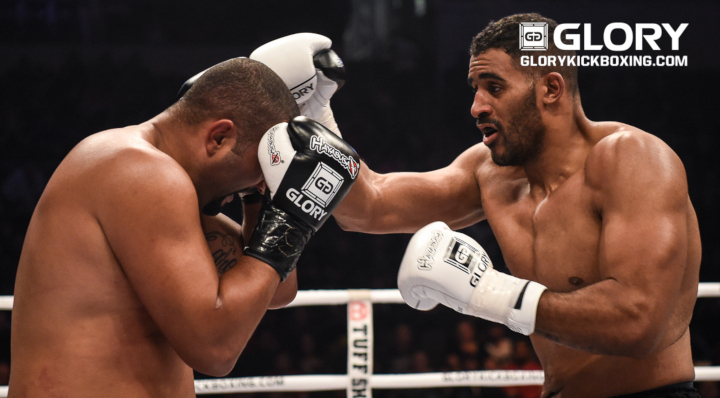 When Benjamin Adegbuyi (30-5, 18 KO’s) and Jahfarr Wilnis first met, it was the final of the GLORY 24 DENVER Heavyweight Contender Tournament.
It was a hard-fought match and both gave it their all. Neither could find a finish though and so it went to the judges, who returned a split-decision in Adegbuyi’s favor.
That result has never sat right with Wilnis (31-9-1, 8 KO’s), who has said he is going into this Friday’s rematch with Adegbuyi “looking to set things straight”.
Coming off a dominating win over Jamal Ben Saddik at GLORY 53 in May, if Wilnis can carry that form into this rematch, Adegbuyi is in for a war.
“A lot of people were surprised he beat Jamal but I wasn’t,” Adegbuyi shrugs.
“Jamal is a big guy but he doesn’t have a big heart. Jahfarr does; he is always coming forward, no matter what. He’ll give anyone a tough time.
“I know he’s confident after that win over Jamal, but I am number one in the Heavyweight rankings for a reason, and I am going to show him why.”
With three Heavyweight Contender Tournament wins to his name, Adegbuyi’s right to the #1 ranking spot is clear-cu. Where it gets murkier is his relationship to the champion, Rico Verhoeven, given that the two are now training together.
Adegbuyi has two losses to Verhoeven in GLORY and is notably reticent to take advantage of opportunities to call for an immediate title shot against him.
Instead, his mind is more on Guto Inocente, who will challenge Verhoeven at GLORY 59 AMSTERDAM later this month. There’s a beef between them, stemming from words exchanged after Inocente won a controversial split-decision over the Romanian.
“I think I won that fight, the judges gave it to him. So to me we have unfinished business. That I would like to settle,” he says.
“I am sure Rico will beat him, I don’t think he has the capability to be champion. When we fought, he gassed in the third round and then ran round the ring like a rabbit, I had to chase him!
“Now imagine that this fight with Rico is set for five rounds. He’s got energy for the first round or two but that’s it.
“A lot of guys, when they fight Rico, they try and blow him away in the first round, they try and show him something, try to intimidate him. But it doesn’t work and then they cannot keep that pace for five rounds.”
Adegbuyi is also interested in fighting Ben Saddik (“I’ve wanted that fight for a long time but it never happened yet; maybe he doesn’t want to fight me?”) and has some thoughts on Badr Hari, last seen in action at GLORY 51 ROTTERDAM back in March.
Since that night, when he beat Hesdy Gerges, the Heavyweight legend has been training hard and regularly updating fans via his Instagram, but his next fight has not yet been signed.
Recently though, Hari and Verhoeven did get into a slanging match via Instagram.
“Badr has been preparing for such a long time now, months. Just take a fight, get used to the ring and take the rematch with Rico, otherwise shut up about him,” says Adegbuyi.
“Don’t get me wrong, I am not defending Rico against him. He’s my training partner but I also want that belt he has. I’m just saying if you want a fight, take the fight. Otherwise better not to talk about it I think.”
Adegbuyi rematches Jahfarr Wilnis this Friday, September 14 at the Sears Centre in Hoffman Estates, Chicago, Illinois.