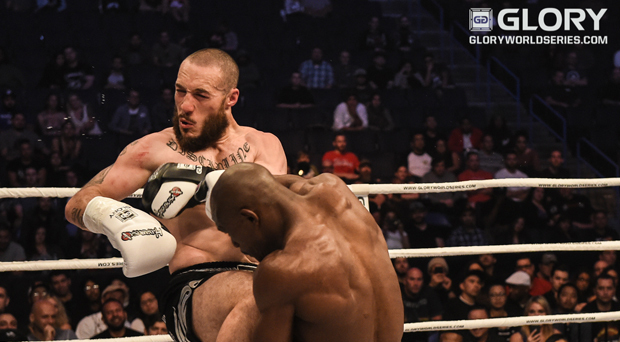 The GLORY 30 LOS ANGELES Welterweight Qualification Tournament was one of the hardest-fought four-man affairs in recent GLORY history, with every one of the participants giving it his all in a bid to win the competition and progress himself to a Contender tournament later this year.

Established GLORY veterans Francois Ambang and Casey Greene lined up opposite Daniel Morales and Richard Abraham respectively, the latter two both having made their debut at GLORY 27 CHICAGO earlier this year.

Abraham was victorious in his Chicago fight against Polish champion Pawel Jedrzejczyk but Morales lost a decision in his, which was actually against Greene. Morales was perhaps unlucky, as he outlanded Greene in that fight but the judges placed more value in Greene's power strikes than Morales' volume.

Still, the Los Angeles tournament represented a chance to avenge the loss in an almost immediate rematch, assuming that he could get past Ambang and Greene could get past Abraham in the first of the evening's semi-finals.

Greene and Abraham had a fierce clash with both pouring firepower onto their opponent relentlessly. The fight looked like a single match rather than a tournament bout, given how much power and energy the two were expending in the course of it.

Things were close but Abraham seemed to have the edge in power and gradually took control of the fight, aided by Greene sustaining a cut over his eye due to an accidental clash of heads in the middle of the fight. Further blows from Abraham added to the swelling and the game Greene only had visibility from his right eye by the time the bout ended.

Abraham won the decision and moved forward to the final, where he would face the winner of the Ambang/Morales match. Those two were hugely fired up for their fight, Morales wanting to score his first GLORY win and Ambang looking to make a statement and edge towards the contender picture.

Their fight went at a ferocious pace, non-stop combination work from both fighters over three rounds. Morales had the speed advantage and used that to land continually with his hands, as he did against Greene in Chicago, while Ambang strung together powerful punch and kick combinations.

Ambang also benefited from a considerable size advantage, with Morales looking almost a weight class smaller than him when they were close together. This lent power to his combination work and allowed him to take over the fight. This time Morales didn't find himself outlanding his opponent either: Ambang had the edge in both power strikes and total strikes landed, taking him through to the final.

Both of them had burned plenty of gas in their semi-final fights but you wouldn't know it to watch them as they engaged in the first round. This was a fight they both badly wanted to win and that meant every ounce of energy would be used in throwing strikes at the other until the final bell.

Notable for their results were Abraham's arcing overhand right, finding a home time and again just inside Ambang's guard, and Ambang's hard outside low kick, often on the end of the classic 1-2-left hook setup. Ambang's form was excellent in this fight – indeed, in this tournament – and his combination work was outstanding.

The final was a very close fight and really could have gone either way, as evidenced by it going to split-decision: one judge had Ambang the winner at 29-28 and the other had the same score for Abraham. The result then rested on a third judge who came back with a score of 30-27 for Abraham. That made him the winner, though even he would probably agree that he didn't win every round.

Disappointment for Ambang as he comes runner-up but he gave a good showing and proved that he still belongs here in the Welterweight mix. Greene always brings fireworks when he fights and was unlucky to sustain that cut; Morales gave a good account of himself but was outsized and could maybe look into a drop to 70 kilograms.

Tournament winner Abraham, now 3-0 in GLORY, moves forward to a spot in the next Welterweight Contender Tournament. That will have him mixing with one or two more famous names but he is unfazed. Asked in a fight week interview who he would like to face next, of anyone in the division, he went for the champion.

“Nieky Holzken! People might say that I am crazy but I think that me and him would match up really well. I love his style and how he fights and I think we would put on a great fight for the fans, and maybe I would surprise some people,” he said.