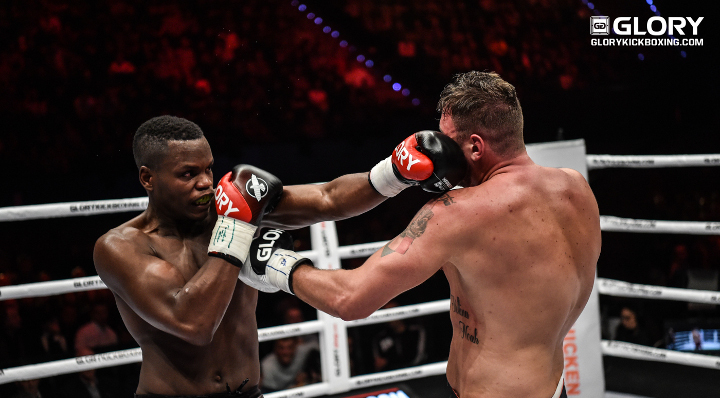 Danyo Ilunga has never prized a victory more highly than that which he won in Rotterdam on Saturday night over Michael Duut.
Last year the two fought each other as part of the GLORY COLLISION card in Oberhausen, Germany, which was Headlined by Badr Hari and Rico Verhoeven.
It was an instant classic, an epic encounter which went back and forth so dramatically that at times it resembled an unrealistic movie fight. Four knockdowns over three rounds, two apiece, led to an extra round and a fifth and final knockdown by Duut, making him the winner.
At the end of that December, fans voted in droves to declare the encounter to be kickboxing’s ‘Fight of the Year 2016’. And when GLORY put together another year-ending mega-event for this year, Duut and Ilunga got called up to run last year’s fight back.
“A fight like that one in 2016, it almost doesn’t matter who wins, because the fans enjoy it so much and both guys give so much of themselves. Its the kind of fight you want to be in, as a fighter,” remarked Ilunga in pre-fight interviews for this rematch.
‘Almost’ is the key word though. Ilunga rode a four-fight losing streak into that contest with Duut last year. The loss made it five straight defeats and by the time this year’s rematch came around, he was on an 0-7 run, albeit with some bad judging decisions in there.
Duut, on the other hand, came into this rematch off the back of his storming run through the GLORY 46 Light-Heavyweight Contender Tournament earlier this year, in which he stopped both opponents in the first round. His entire tournament run was forty-eight seconds.
To say Ilunga was the underdog in the rematch would be putting it mildly, given his recent form, although Duut does have a tendency to be wildly inconsistent and that does make him difficult to consider a safe bet.
Pre-fight, both fighters said they would be taking a more measured, technical approach to this fight rather than the gloved bar-fight they had endured a year previous.
Duut had promised a different approach but what he hadn’t foretold was a complete personality change. Compassion was the last thing anyone expected to see from him and yet in the first round that’s what it looked like as Duut rocked Ilunga near the ropes and all but had him finished.
One more solid blow would have done it and yet Duut inexplicably hesitated, backed off and allowed Ilunga to survive. Duut’s coach and cornerman Melvin Manhoef was apoplectic in his corner and looked like he had half a mind to jump into the ring and finish off Ilunga himself. Either that, or take over from Ilunga and try to beat some sense into Duut.
Either way, the merciful gesture proved to be a fatal mistake, one which would come back to haunt him in the third round. While Duut was high-stepping through a 1-2 set of knee strikes to the body, Ilunga circled out of his path and landed a heavy right cross on his rival’s chin.
Duut crashed to the canvas. He quickly managed to roll to his knees and for a moment it looked like he would beat the referee’s count and get back into the fight. But the seconds ticked away quicker than Duut could shake the effects of the blow off. Before he knew it, the fight was being waved off and Ilunga was celebrating a KO victory.
Even sweeter for Ilunga was the fact that this was a their trilogy fight: Duut lost by TKO at GLORY 11 CHICAGO due to a dislocation suffered when he overextended on a punch. He then won the COLLISION battle last year but lost by KO in this one, putting Ilunga 2-1 in their trilogy with both wins inside the distance.
Duut’s penchant for alternating wins and losses suggests he will come bouncing back from this defeat with another installment of fight-winning whirlwind violence. Ilunga hopes this win will set him up for a successful 2018 run, having snapped his run of losses at last.
Will we see another match between these two next year? They say not, but don’t count it out. Ilunga and Duut are shaping up to be the something akin to the Mickey Ward and Arturo Gatti of kickboxing’s light-Heavyweight division.