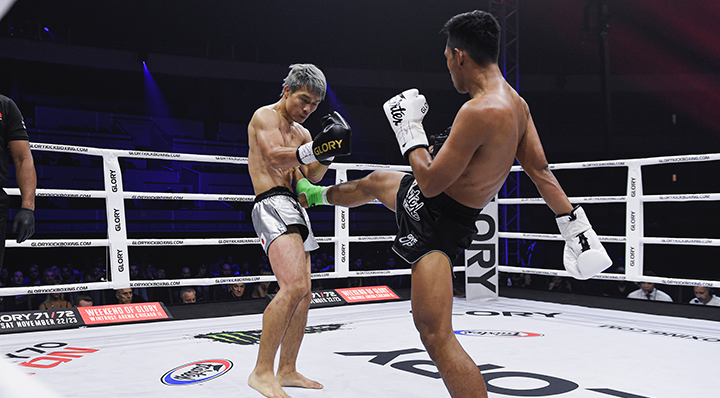 Kubo wasted no time closing the distance. The two southpaws traded left kicks. Thong backed Kubo off with punches. Kubo remained aggressive in the pocket, scoring with punches along the ropes.

Thong caught a kick from Kubo and threw a counter left straight. A right kick from Thong found the midsection of Kubo, but it did not slow his advance. Thong closed the round with a powerful push kick that sent Kubo across the ring.

The Featherweights quickly clinched in round two. After separating, a low blow caught Kubo to pause the action for a moment.

Thong dictated the pace and range with his low kicks. Every Kubo advance was met with a heavy kick to the body from the Thai fighter. Kubo landed a left hand in the pocket, but Thong answered back with a left straight of his own to end the frame.

Down on the scorecards, Kubo came out more aggressively in the final stanza. Thong used his kicks to keep Kubo outside of punching range. The low kicks from Thong kept Kubo guessing, allowing Thong to score with his left hand.

Thong was warned by the referee for holding midway through the round. A heavy left hand from Kubo was blocked by the guard of Thong. Thong closed the fight with a series of short knees in the clinch.

The decision was lopsided in favor of Thong, as he swept the scorecards from four of the five judges at ringside.