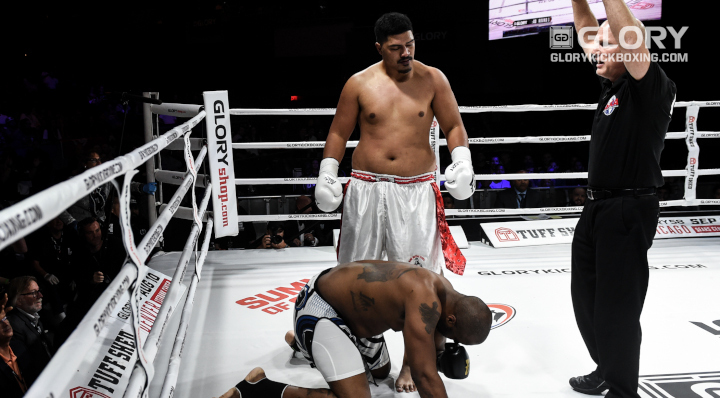 Heavyweights locked horns as Australian Junior Tafa (18-3, 14 KO) met American Anthony McDonald (8-2, 6 KO) on the GLORY 55 Main Card.
The taller and longer McDonald fired a series of body kicks to open the bout. Tafa responded with heavy punches and a thundering knee that hurt McDonald briefly.
After a brief exchange, a left hook from Tafa dropped McDonald. He recovered from the referee’s count, but only for a moment as Tafa earned a second knockdown with a short right hand behind the ear of McDonald.
A third knockdown came just two punches later as McDonald crumbled to the mat and Tafa celebrated the victory.
The win marked Tafa’s second inside the GLORY ring and his second by knockout. The Australian had some words for his opponent following his quick win.
“If you’re going to call me out, come to fight,” said Tafa.
With McDonald out of his way, Tafa quickly set his sights on bigger and better things.
“Anyone in the top five, come at me, I’m ready,” he declared before dancing his way out of the ring.
Junior Tafa def. Anthony McDonald by TKO (three-knockdown rule). Round 1, 2:20