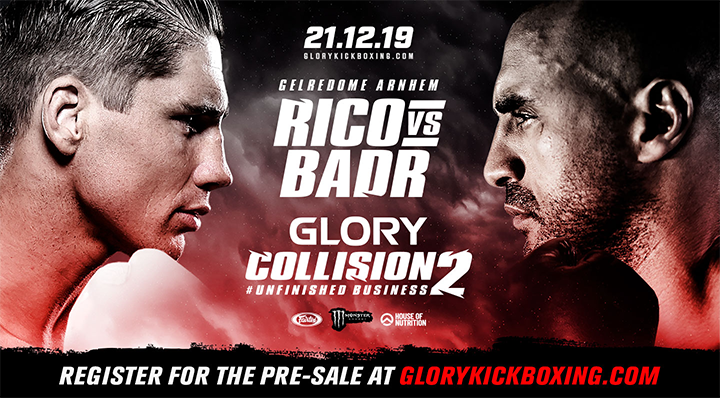 Rico Verhoeven and Badr Hari to rematch at GLORY: COLLISION 2

GLORY, the world’s premier stand-up combat organization, today announced that a date is set for the long-awaited rematch between Rico ‘The King of Kickboxing’ Verhoeven (55-10, 16 KO’s) and Badr Hari (106-13, 92 KO’s).

The two arch-rivals will Headline GLORY: COLLISION 2 on Saturday, December 21at the GelreDome in Arnhem, the Netherlands.

“This is the fight that everybody wanted. And mark my words, I always finish what I start! No use running away this time,” said Verhoeven, promising a definitive end to the rivalry.

For his part, Hari warned Verhoeven to prepare for a new level of challenge in December.

“I know exactly what to expect from this fight but he doesn’t have any idea of who is coming after him. Rico will be facing Badr Hari for the first time,” he said.

When the two step in the ring for a five-round fight later this year it will be almost three years to the day that they first met.

Their Headline fight at GLORY: COLLISION in December 2016 was at the time the biggest fight in kickboxing history, a mantle now taken by this highly-anticipated rematch.

Their first encounter was closely contested until the second round, when an arm injury rendered Hari unable to continue and made Verhoeven the winner by way of Technical Knockout (TKO).

Fans around the world have clamored for the rematch ever since and the wait has only heightened the anticipation.

“Millions of people across the planet have been waiting for this. This is the fight the fans want, it’s the fight Rico wants and it’s the fight Badr wants,” said Marshall Zelaznik, GLORY CEO.

“This is the biggest fight in the history of the sport and GLORY has been able to put it together to end 2019 in a huge way.”

Full broadcast details and further fights for the GLORY: COLLISION 2 card will be announced in the coming weeks.