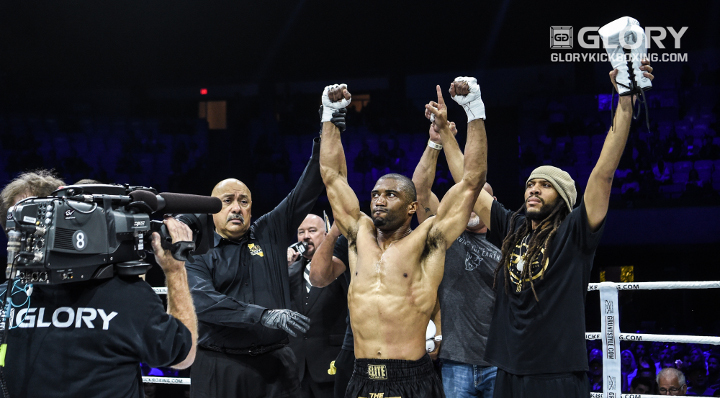 Marcus scores first-round stoppage to get back on title trail

Simon Marcus (48-4-2, 26 KO’s) has twice held and twice lost the world Middleweight championship. But he is adamant he will win it back and thereby become the first fighter in GLORY history to win a division’s belt three times.
Marcus’ road back toward that goal was supposed to start with a four-man Middleweight Contender Tournament at GLORY 52 tonight. But when the tournament fell apart due to pull-outs, he found himself without an opponent. Zack Wells (5-1, 5 KO’s) stepped up.
The 5-0 record Wells brought to the fight was dwarfed by Marcus’ but did consist of nothing but finishes. That 100% finish rate was what made Wells confident enough to take the bout. He said Marcus “will never have felt power like mine”.
As things turned out, the prediction was somewhat true - Wells did not get much chance to get any offense going before the fight was stopped in the first round, Marcus taking control so fully that the referee intervened to prevent Wells taking unnecessary damage.
Wells disagreed with the stoppage and afterwards said that his low level of output was deliberate. He said he wanted to get a good look at Marcus and get a feel for his style. The referee didn’t see it that way and so the fight got called.
The win over Wells, who is young in his career, does not make any kind of forceful statement about Marcus’ potential to regain and retain the Middleweight belt, but a win is a win and it does at least move him forward to the next stage of his title campaign.
Despite the quick stoppage, Wells shows some potential. Having stepped up to fill the vacant slot opposite Marcus, he will be matched at a more appropriate level for his next GLORY outing.