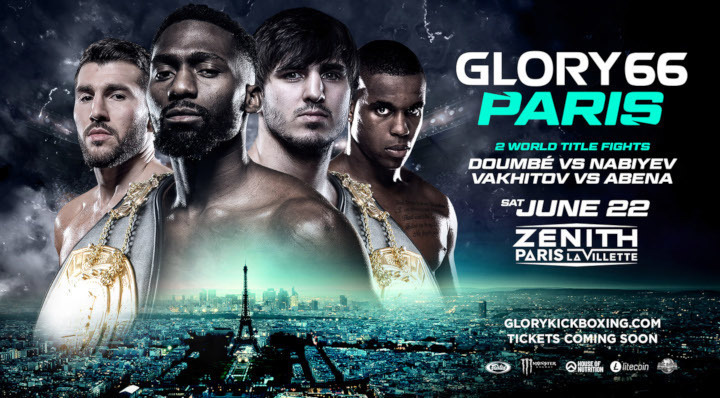 GLORY has today confirmed that Anissa Meksen (98-4, 31 KO’s), the world super-bantamweight champion, will defend her title against the winner of this Friday’s GLORY 65 UTRECHT fight between Sweden’s Sofia ‘The Wolf’ Olofsson and the UK’s Cristi Brereton.

Meksen is the most dominant female kickboxing champion in the world today. She arrived in GLORY in July 2017 with a 32-fight unbeaten run and became champion in December 2017 by taking the belt from Tiffany van Soest of California, USA.

The fight adds to two other world championship fights on the card.

In the co-Headline bout, world light-Heavyweight champion Artem Vakhitov (20-5, 8 KO’s) journeys from Siberia to make a fifth defense of his belt. He faces the hulking young prospect Donegi ‘The Silverback’ Abena (24-5, 6 KO’s).

Two-time Welterweight champion Doumbé commenced his first reign over the division when he defeated Nieky ‘The Natural’ Holzken at GLORY 36. He made two title defenses before losing it by way of a controversial decision at GLORY 44.

Doumbé then battled his way back to another title shot. He successfully reclaimed his belt at GLORY 64 in Strasbourg this past March, marking the start of his second Welterweight championship reign.

Between losing and regaining his title Doumbé suffered only one loss. That was to Nabiyev, who took a split-decision victory at GLORY 51 in March last year. Based in Baku, Azerbaijan, ‘The Professor’ now counts three wins over current or former champions in his 5-1 GLORY record.

Nabiyev came up short in his own title shot in GLORY 54 and now gets second chance at gold, while Doumbé gets chance to defend his belt and settle the scores in his home city.

Russian’s Vakhitov is the most dominant light-Heavyweight champion in GLORY history. Frequently cited in the pound-for-pound conversation, he has nine wins from ten GLORY appearances and rides a six-fight win streak into this fight.

Nagging injury issues kept Vakhitov sidelined for most of 2018 but now he’s ready to return and remind the division why he is champion. He has scored stoppage wins in two of his four title defenses and will be looking to add another to the list on June 22.

Abena was born in Suriname, South America but raised in the Netherlands. He endured a turbulent youth, including several spells in children’s homes, before discovering kickboxing and finding a way to channel his energies.

Fighting out of Mike’s Gym, Amsterdam, where his team mates include Badr Hari, Abena scored wins over GLORY veterans on the European circuit to earn a call-up to the premier kickboxing league, where he since gone 2-0.