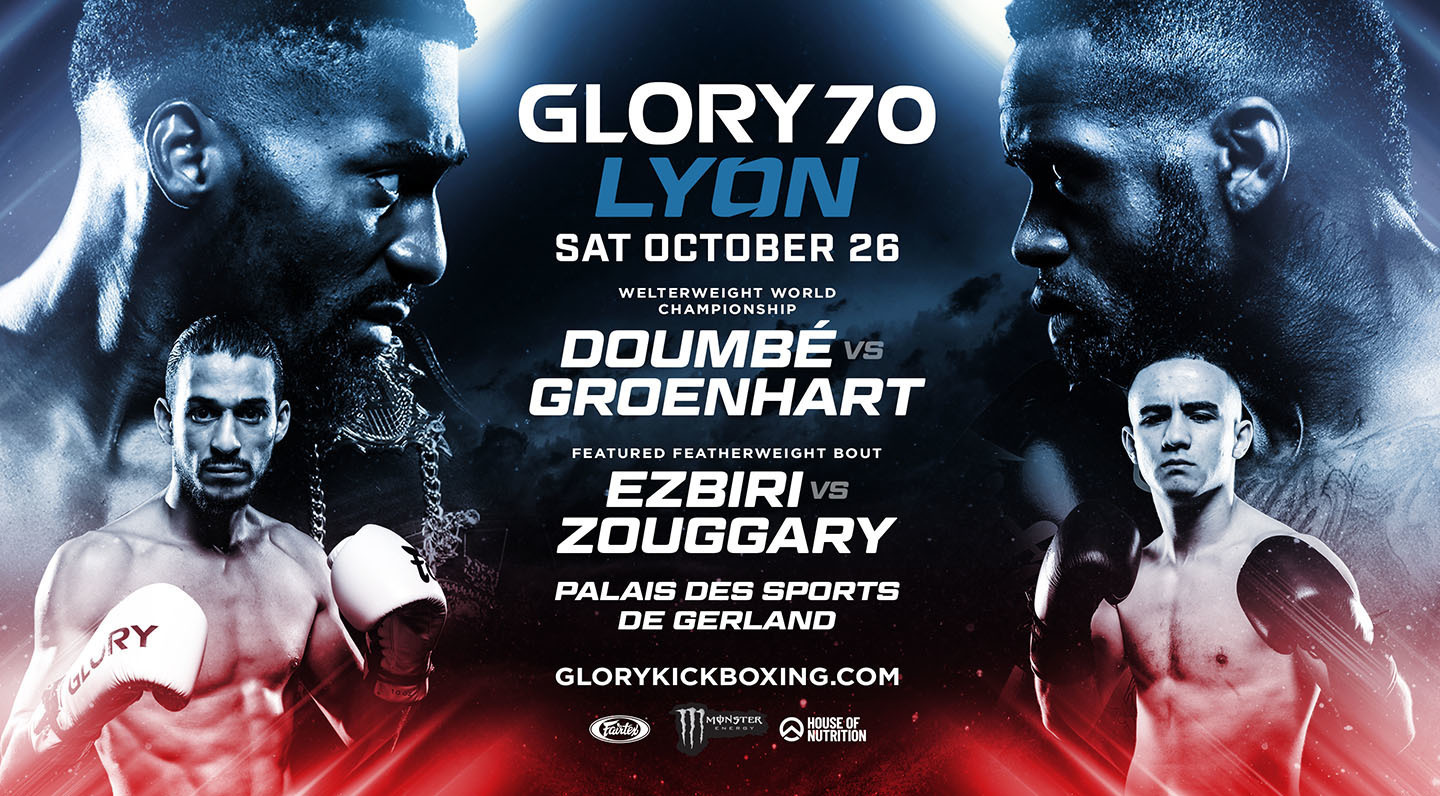 AMSTERDAM - The world Welterweight championship will be on the line when reigning champion Cedric ‘The Best’ Doumbé (73-6-1, 43 KO’s) and former champion Murthel ‘The Predator’ Groenhart (68-24-3, 39 KO’s) meet for their trilogy match in the main event of at GLORY 70 LYON on Saturday, October 26.

Doumbé and Groenhart have a storied history and each holds a win over the other. The winner of their GLORY 70 showdown will walk away not only with the world championship but also as the winner of their trilogy series.

The rivalry between the two top-tier Welterweights commenced with their GLORY 28 encounter, when a then-unknown Doumbé shocked fight fans by beating Groenhart over three rounds.

Groenhart would have gone forward to a title shot had he won, but instead had to watch Doumbé leapfrog him in the rankings before going on to secure the title himself by outclassing former champion Nieky Holzken at GLORY 36.

For Groenhart, the fact that Doumbé showboated throughout the fight and talked disparagingly about him afterwards ensured that the professional rivalry developed into a personal one.

At GLORY 44, ‘The Predator’ got his revenge. Refusing to let Doumbé affect his focus with trash-talk and mind-games, Groenhart maintained his composure and took the world title from his French rival by way of decision after five rounds of fighting.

In the intervening period, the Welterweight championship - which has the most turbulent history of any GLORY weight division - has passed from Groenhart’s hands to a new owner before finally making its way once again to Doumbé’s waist.

Now the two rivals are once again on a collision course. The stage will be the Palais de Sport de Gerland in Lyon, France and the stakes are sky-high for both participants.

For Doumbé, a win makes him unquestionably the most dominant Welterweight champion in kickboxing history and adds weight to his claim to being the pound-for-pound best striker on the planet today.

For Groenhart, it’s a question of legacy. The highly-decorated veteran is one of the most accomplished fighters in the sport and will seek to issue a reminder of that status to Doumbé - and the rest of the division - in forceful fashion.

“Cedric Doumbé and Murthel Groenhart have one of the strongest rivalries in the entire history of this sport. There’s an intense personal dislike which adds to the professional rivalry and that’s going to boil up in the ring in Lyon on October 30,” said Marshall Zelaznik, GLORY CEO.

Also on the card is a clash with implications for the Featherweight contender picture as France’s Abdellah Ezbiri (47-14-1, 14 KO’s) meets with the Netherlands’ Zakaria Zougarry (31-5-1, 15 KO’s).

The pair, both of Moroccan heritage, have proven themselves to be among the division’s top talents and have numerous spectacular victories to their credit.

But both found themselves on the losing side of decisions in their last GLORY outings, making this fight a must-win clash in order to move closer to their goal of a world championship title shot.

Further bouts for the card will be announced in the coming days.