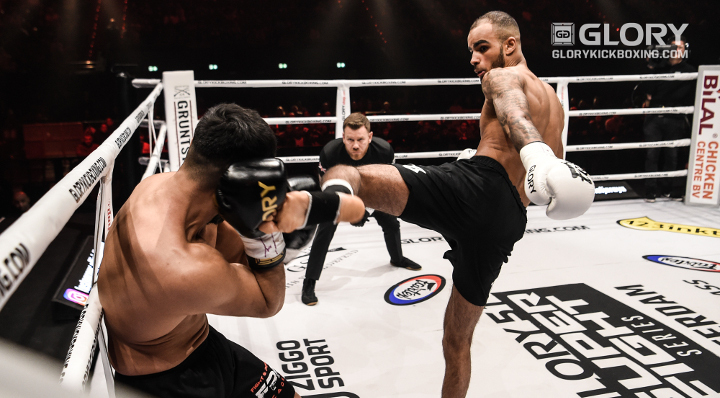 Stoyan Koprivlenski was one win away from a title shot when he entered the ring against Josh Jauncey at GLORY 52 LOS ANGELES last month.
But then Josh Jauncey was coming off a stoppage loss to Elvis Gashi at GLORY 43 and had been on a rocky run. Koprivlenski, a relative newcomer to kickboxing’s top level, was the slight favorite, prompting Jauncey to put on career-best display which both won him the fight and the ‘Performance of the Night’ award.
Koprivlenski’s title shot had to wait. Matchmakers then moved to the next name on their list, 21-year-old Tyjani Beztati(16-2, 6 KO’s).
The young prospect is #3 in the rankings and 6-1 in GLORY, but his coaches hadn’t reckoned on taking a title shot before the end of this year, but didn’t hesitate when the opportunity to face Sitthichai (119-30-5, 30 KO’s) came knocking.
“When we got the call that GLORY wanted Tyjani against Sitthichai, I didn’t say yes immediately. For me, it all depended on the reaction of Tyjani,” says Danny De Vries, head coach at Team Collosseum.
“I said to myself that if he seemed reluctant or like he wasn’t enthusiastic for it, I would turn the fight down. So I went to Tyjani and said there was an opportunity to fight Sitthichai.
‘Get me that fight! I want that fight!’ he said. “Well, there was my answer. There was not the slightest doubt or hesitation in Tyjani, so I said OK, let’s go for it.”
Despite his young fighters’ enthusiasm for the challenge, De Vries, who also counts Mohammed Jaraya and the Wilnis brothers Jason and Jahfar among his stable, makes no pretense of being in for an easy night.
“Look, there is nothing to lose for Tyjani. What is the worst that can happen? There is no shame in losing to the champion of the world and so there is no pressure.
“It’s a tough fight, of course it is. Sitthichai is good, man, really good. There is a reason he is the world champion. But he is not coming over for an easy win,” he says.
“We have studied him - really studied him - and there are some things. You look at his last three or four fights and you can see some same things.
“One mistake I think everyone makes is that they wait for the left kick. Well, we won’t be waiting for it. That’s all I’m going to say!”
Tyjani Beztati faces Sitthichai in the main event of GLORY 53 LILLE at the Zenith de Lille Arena on Saturday May 12.