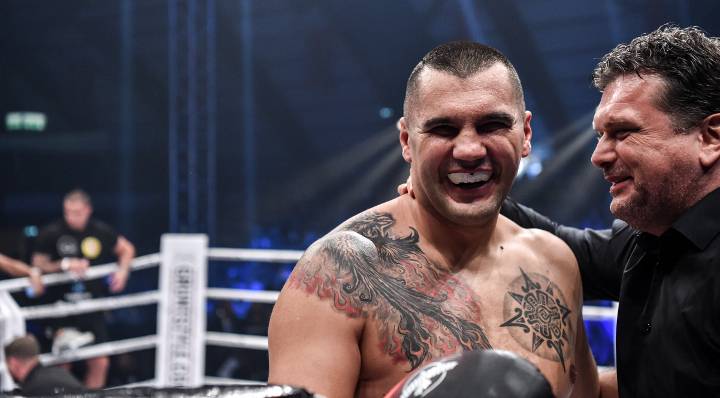 Brestovac: “Rico needs to watch out for more than the left head kick!”

Back in March 2016, Croatian Heavyweight Mladen ‘The Scorpion Sting’ Brestovac (56-12-1, 35 KO’s) headed to Paris, France to challenge world Heavyweight champion Rico Verhoeven (53-10, 16 KO’s) for his title.
The attempt wasn’t successful. After five rounds of fighting, Verhoeven retained the Heavyweight championship by way of unanimous decision.
But Brestovac’s performance raised some eyebrows; to this day, many fans maintain he gave Verhoeven the hardest challenge of his GLORY championship tenure.
Now, just over two years on from their first meeting, the two are set to meet again as they square off in the main event of GLORY 54 BIRMINGHAM on Saturday, June 2.
“It’s hard to say if that first fight was his toughest challenge [in GLORY]. I think it was a good fight but he had some very tough fights in GLORY before and after, so probably you should ask him that question!’ laughs Brestovac.
“When you fight a guy for five rounds you can see and learn some things, but every fight is different - especially if its two years apart. I think he got much better since our first fight but so have I.”
Pressed for specifics, Brestovac says he has “grown mentally since that first fight and also gained a lot of top-level experience since then, especially fighting in GLORY”.
One of those fights was against the veteran Hesdy Gerges at GLORY 49 last September. Gerges is notoriously tough, known for giving opponents a grinder of a fight, but Brestovac shocked everyone with a lightning-quick knockout win.
Gerges started out with his trademark low kicks to Brestovac’s lead leg. Brestovac absorbed some kicks, timed Gerges’ movements, then fired back with an almighty southpaw left head kick which knocked Gerges out instantly, just 37 seconds into the fight.
Verhoeven was ringside. Cameras happened to catch his reaction, as his hand flew to his mouth and he looked left and right, wide eyed in amazement, sharing his shock with fans sat around him.
“I think that knockout surprised everybody in the arena that night because nobody expected it, especially so early in the fight,” smiles Brestovac.
Verhoeven has since said Brestovac is “lethal” with the left high kick, but the Croatian says that is only one of many tricks in his repertoire.
“Actually I don’t even practice the high kick when I’m training, I usually focus on different aspects of the game. So, yeah, I think he should be careful, look out for some different things.”
Brestovac challenges Verhoeven in the main event of GLORY 54 BIRMINGHAM on Saturday, June 2 at the Genting Arena in Birmingham, England.