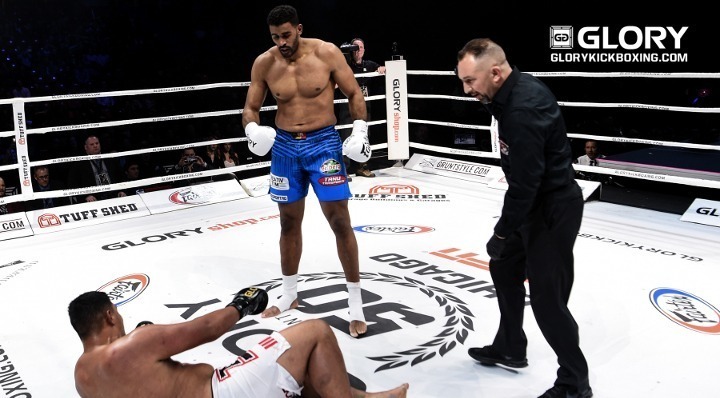 Adegbuyi now owns three tournament wins and has cemented his position as the #1 fighter in the Heavyweight contender listings. The question now is whether, after two unsuccessful attempts at dethroning the champion Rico Verhoeven, he can make the third time the charm.

Ahead of this tournament Adegbuyi deflected questions about a possible third fight with Verhoeven, because since mid-2016 he’s been training under Dennis Krauweel, Verhoeven’s long time coach, and often alongside Verhoeven himself.

Following his tournament win, he conceded that a third showdown with Verhoeven looks to be on the cards, although he also expressed interest in a fight with Badr Hari, who faces Hesdy Gerges at GLORY 51 ROTTERDAM next week.

Adegbuyi’s road to tournament victory started with a thirty-second KO win over D’Angelo Marshall in the semi-finals. The two got into immediate heavy exchanges when the fight started, but Adegbuyi’s boxing sense allowed him to time Marshall’s jab.

When Marshall pushed that jab out to start another exchange, Adegbuyi looped an overhand right over the top of it and sent Marshall slumping forwards to the canvas. The referee began a count but quickly realized that Marshall was not able to continue and so waved the fight off.

In the other semi-final, 21-year-old Australian prospect Junior Tafa faced off with Brazilian veteran Guto Inocente in a styles clash. Inocente is a dangerous kicker, Tafa a power-puncher.

The fight was surprisingly careful, each respecting the other’s key strength and therefore not getting too wild with the offense. Tafa waited for opportunities to land one of his trademark bombs but as a result his output was less than Inocente’s over the course of the fight.

That meant that when they went to the judges, the decision went Inocente’s way due to his higher amount of strikes and wider variety.

But in a twist of fate, a cut over Inocente’s eye caused by a second-round clash of heads meant that doctors would not clear him to take his place in the final. Thus it was Tafa who strolled down the catwalk to face Adegbuyi and dispute the tournament trophy.

Ironically, despite Adegbuyi being ranked #1 in the division, Tafa approached him much more aggressively than he had Inocente, probably due to Adegbuyi being a more orthodox fighter.

Meaty punch exchanges characterized the first round of the fight. The key difference was that Adegbuyi ended his combinations with low kicks to the outside and inside of Tafa’s lead leg, whereas Tafa hardly kicked.

He also hardly defended against the low kicks. At least, not until it was too late. With one minute left in the first round Tafa was already limping. Adegbuyi landed a kick which sent him to the canvas in pain, for his first knockdown call of the fight.

Moments later he was downed by another kick. He took as long as he could to regain his feet without being counted out, with the referee taking a close look at him. One more knockdown would end the fight but Tafa confounded Adegbuyi by going on the offensive for the last twenty seconds of the round and taking away his clean kicking opportunities.

Still, Tafa was clearly in trouble. There was no chance his leg was going to hold out for much more punishment. Sure enough, Adegbuyi went straight back to working the leg in the second round and after thirty seconds he found the shot which would put Tafa down for what turned out to be the third and final time in the fight.

While Adegbuyi’s kickboxing sensibilities were clear leagues ahead of Tafa’s, the young Australian earned himself a lot of new fans with his gritty display and no-nonsense fighting style.