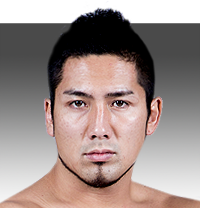 Formerly known as Koichi Pettas in honour of his trainer Nicholas Pettas, these days the man born Koichi Watanabe uses only his first name as his career moniker.

Often listed as a kickboxing stylist, Koichi can actually trace his lineage directly back to the founder of Kyokoshin Karate, sensei Mas Oyama. The style was developed to be karate’s answer to Muay Thai and it is considered to be one of the hardest fighting styles in the world today.

Koichi’s trainer Pettas was one of a handful of non-Japanese to be invited to become a live-in student of Oyama’s (uchi-deshi) and was one of only two non-Japanese ever to complete the gruelling 1,000 day course.

He emerged steeped in the principles of Kyokushin Karate - hard physical conditioning, relentless attach, incredible pain tolerance. This was then passed on to Pettas’ own students, including Koichi, who has demonstrated these qualities in over 35 professional kickboxing fights.

Having spent most of his career at heavyweight, Koichi dropped to light-heavyweight following back-to-back losses to Jerome Le Banner in GLORY events. He should enjoy some physical advantages at 93kg/203lbs and he hopes to become an immediate force in the weight class.